We can judge whether Hawaiian Electric Industries, Inc. (NYSE:HE) is a good investment right now by following the lead of some of the best investors in the world and piggybacking their ideas. There’s no better way to get these firms’ immense resources and analytical capabilities working for us than to follow their lead into their best ideas. While not all of these picks will be winners, our research shows that these picks historically outperformed the market when we factor in known risk factors.

Hawaiian Electric Industries, Inc. (NYSE:HE) has experienced an increase in support from the world’s most elite money managers lately. HE was in 13 hedge funds’ portfolios at the end of the fourth quarter of 2018. There were 11 hedge funds in our database with HE holdings at the end of the previous quarter. Our calculations also showed that HE isn’t among the 30 most popular stocks among hedge funds.

At the end of the fourth quarter, a total of 13 of the hedge funds tracked by Insider Monkey were bullish on this stock, a change of 18% from the second quarter of 2018. Below, you can check out the change in hedge fund sentiment towards HE over the last 14 quarters. With hedgies’ capital changing hands, there exists a select group of noteworthy hedge fund managers who were adding to their stakes meaningfully (or already accumulated large positions). 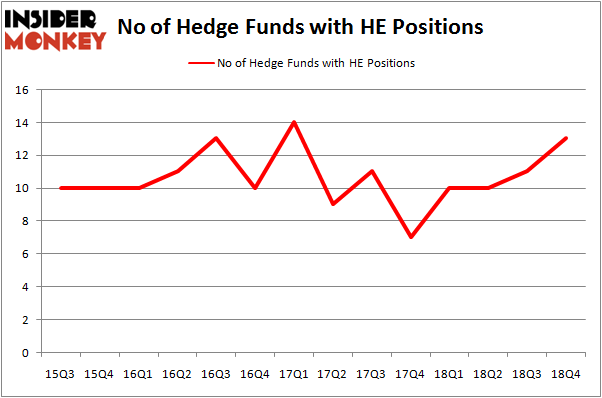 Of the funds tracked by Insider Monkey, Jeffrey Ubben’s ValueAct Capital has the largest position in Hawaiian Electric Industries, Inc. (NYSE:HE), worth close to $55.2 million, corresponding to 0.7% of its total 13F portfolio. Coming in second is Renaissance Technologies, managed by Jim Simons, which holds a $32.7 million position; the fund has less than 0.1%% of its 13F portfolio invested in the stock. Some other professional money managers with similar optimism comprise David Harding’s Winton Capital Management, Cliff Asness’s AQR Capital Management and Brian Olson, Baehyun Sung, and Jamie Waters’s Blackstart Capital.

As industrywide interest jumped, key hedge funds were breaking ground themselves. Arrowstreet Capital, managed by Peter Rathjens, Bruce Clarke and John Campbell, created the most outsized position in Hawaiian Electric Industries, Inc. (NYSE:HE). Arrowstreet Capital had $2.7 million invested in the company at the end of the quarter. Andrew Feldstein and Stephen Siderow’s Blue Mountain Capital also initiated a $0.1 million position during the quarter. The only other fund with a new position in the stock is Gavin Saitowitz and Cisco J. del Valle’s Springbok Capital.

As you can see these stocks had an average of 27.75 hedge funds with bullish positions and the average amount invested in these stocks was $641 million. That figure was $162 million in HE’s case. Tribune Media Company (NYSE:TRCO) is the most popular stock in this table. On the other hand Entegris Inc (NASDAQ:ENTG) is the least popular one with only 18 bullish hedge fund positions. Compared to these stocks Hawaiian Electric Industries, Inc. (NYSE:HE) is even less popular than ENTG. Hedge funds dodged a bullet by taking a bearish stance towards HE. Our calculations showed that the top 15 most popular hedge fund stocks returned 24.2% through April 22nd and outperformed the S&P 500 ETF (SPY) by more than 7 percentage points. Unfortunately HE wasn’t nearly as popular as these 15 stock (hedge fund sentiment was very bearish); HE investors were disappointed as the stock returned 12.8% and underperformed the market. If you are interested in investing in large cap stocks with huge upside potential, you should check out the top 15 most popular stocks) among hedge funds as 13 of these stocks already outperformed the market this year.