Is Harmonic Inc (NASDAQ:HLIT) a good equity to bet on right now? We like to check what the smart money thinks first before doing extensive research. Although there have been several high profile failed hedge fund picks, the consensus picks among hedge fund investors have historically outperformed the market after adjusting for known risk attributes. It’s not surprising given that hedge funds have access to better information and more resources to find the winners in the stock market.

Is Harmonic Inc (NASDAQ:HLIT) worth your attention right now? The best stock pickers are taking an optimistic view. The number of bullish hedge fund positions moved up by 1 recently. Our calculations also showed that HLIT isn’t among the 30 most popular stocks among hedge funds. HLIT was in 13 hedge funds’ portfolios at the end of the fourth quarter of 2018. There were 12 hedge funds in our database with HLIT positions at the end of the previous quarter.

In the eyes of most traders, hedge funds are seen as underperforming, old investment vehicles of years past. While there are more than 8000 funds trading at the moment, We hone in on the leaders of this group, about 750 funds. Most estimates calculate that this group of people oversee most of the smart money’s total capital, and by shadowing their best stock picks, Insider Monkey has uncovered various investment strategies that have historically outstripped the S&P 500 index. Insider Monkey’s flagship hedge fund strategy outpaced the S&P 500 index by nearly 5 percentage points a year since its inception in May 2014 through early November 2018. We were able to generate large returns even by identifying short candidates. Our portfolio of short stocks lost 27.5% since February 2017 (through March 12th) even though the market was up nearly 25% during the same period. We just shared a list of 6 short targets in our latest quarterly update and they are already down an average of 6% in less than a month.

Heading into the first quarter of 2019, a total of 13 of the hedge funds tracked by Insider Monkey were bullish on this stock, a change of 8% from one quarter earlier. The graph below displays the number of hedge funds with bullish position in HLIT over the last 14 quarters. With hedge funds’ capital changing hands, there exists a few notable hedge fund managers who were boosting their holdings substantially (or already accumulated large positions). 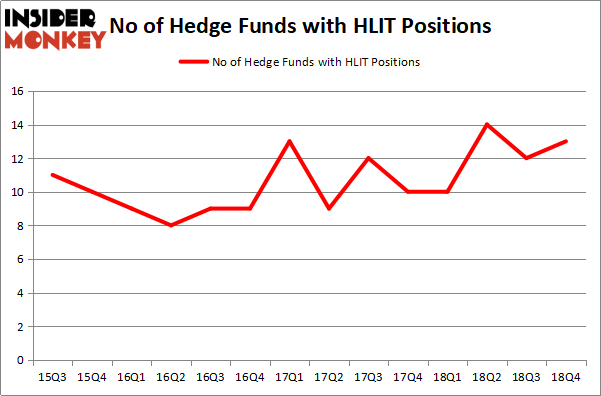 More specifically, Raging Capital Management was the largest shareholder of Harmonic Inc (NASDAQ:HLIT), with a stake worth $28.4 million reported as of the end of December. Trailing Raging Capital Management was Divisar Capital, which amassed a stake valued at $15.9 million. Royce & Associates, Millennium Management, and Renaissance Technologies were also very fond of the stock, giving the stock large weights in their portfolios.

Consequently, specific money managers have been driving this bullishness. Divisar Capital, managed by Steven Baughman, initiated the most valuable position in Harmonic Inc (NASDAQ:HLIT). Divisar Capital had $15.9 million invested in the company at the end of the quarter. Peter Muller’s PDT Partners also initiated a $0.2 million position during the quarter.

As you can see these stocks had an average of 10.5 hedge funds with bullish positions and the average amount invested in these stocks was $55 million. That figure was $60 million in HLIT’s case. Vishay Precision Group Inc (NYSE:VPG) is the most popular stock in this table. On the other hand Osmotica Pharmaceuticals plc (NASDAQ:OSMT) is the least popular one with only 9 bullish hedge fund positions. Harmonic Inc (NASDAQ:HLIT) is not the most popular stock in this group but hedge fund interest is still above average. Our calculations showed that top 15 most popular stocks) among hedge funds returned 24.2% through April 22nd and outperformed the S&P 500 ETF (SPY) by more than 7 percentage points. Hedge funds were also right about betting on HLIT, though not to the same extent, as the stock returned 20.1% and outperformed the market as well.