A market correction in the fourth quarter, spurred by a number of global macroeconomic concerns and rising interest rates ended up having a negative impact on the markets and many hedge funds as a result. The stocks of smaller companies were especially hard hit during this time as investors fled to investments seen as being safer. This is evident in the fact that the Russell 2000 ETF underperformed the S&P 500 ETF by nearly 7 percentage points during the fourth quarter. We also received indications that hedge funds were trimming their positions amid the market volatility and uncertainty, and given their greater inclination towards smaller cap stocks than other investors, it follows that a stronger sell-off occurred in those stocks. Let’s study the hedge fund sentiment to see how those concerns affected their ownership of Hanmi Financial Corp (NASDAQ:HAFC) during the quarter.

Is Hanmi Financial Corp (NASDAQ:HAFC) a buy here? Money managers are selling. The number of long hedge fund bets were cut by 2 in recent months. Our calculations also showed that HAFC isn’t among the 30 most popular stocks among hedge funds. HAFC was in 10 hedge funds’ portfolios at the end of December. There were 12 hedge funds in our database with HAFC holdings at the end of the previous quarter.

To the average investor there are a multitude of metrics stock market investors use to appraise publicly traded companies. A couple of the most underrated metrics are hedge fund and insider trading activity. Our researchers have shown that, historically, those who follow the best picks of the best investment managers can outperform the S&P 500 by a solid margin (see the details here).

What does the smart money think about Hanmi Financial Corp (NASDAQ:HAFC)?

At Q4’s end, a total of 10 of the hedge funds tracked by Insider Monkey were bullish on this stock, a change of -17% from the previous quarter. Below, you can check out the change in hedge fund sentiment towards HAFC over the last 14 quarters. With hedgies’ sentiment swirling, there exists a few key hedge fund managers who were upping their holdings meaningfully (or already accumulated large positions). 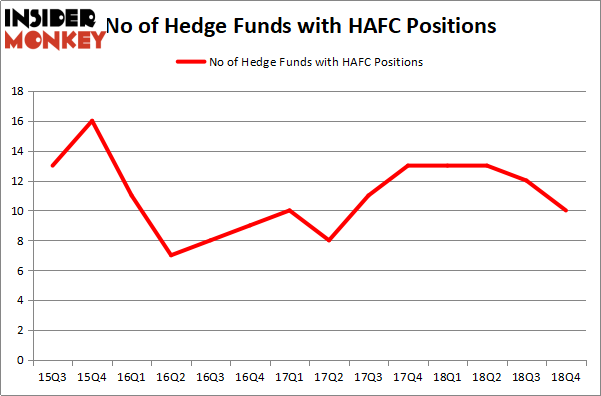 The largest stake in Hanmi Financial Corp (NASDAQ:HAFC) was held by Renaissance Technologies, which reported holding $18.6 million worth of stock at the end of December. It was followed by AQR Capital Management with a $4.1 million position. Other investors bullish on the company included Citadel Investment Group, D E Shaw, and GLG Partners.

Since Hanmi Financial Corp (NASDAQ:HAFC) has experienced declining sentiment from the entirety of the hedge funds we track, we can see that there were a few hedgies that elected to cut their entire stakes in the third quarter. Interestingly, Israel Englander’s Millennium Management sold off the biggest stake of the “upper crust” of funds followed by Insider Monkey, valued at an estimated $9.5 million in stock. Roger Ibbotson’s fund, Zebra Capital Management, also dropped its stock, about $0.3 million worth. These bearish behaviors are intriguing to say the least, as aggregate hedge fund interest dropped by 2 funds in the third quarter.

As you can see these stocks had an average of 11 hedge funds with bullish positions and the average amount invested in these stocks was $32 million. That figure was $33 million in HAFC’s case. Intra-Cellular Therapies Inc (NASDAQ:ITCI) is the most popular stock in this table. On the other hand McEwen Mining Inc (NYSE:MUX) is the least popular one with only 5 bullish hedge fund positions. Hanmi Financial Corp (NASDAQ:HAFC) is not the least popular stock in this group but hedge fund interest is still below average. This is a slightly negative signal and we’d rather spend our time researching stocks that hedge funds are piling on. Our calculations showed that top 15 most popular stocks) among hedge funds returned 24.2% through April 22nd and outperformed the S&P 500 ETF (SPY) by more than 7 percentage points. Unfortunately HAFC wasn’t nearly as popular as these 15 stock (hedge fund sentiment was quite bearish); HAFC investors were disappointed as the stock returned 11% and underperformed the market. If you are interested in investing in large cap stocks with huge upside potential, you should check out the top 15 most popular stocks) among hedge funds as 13 of these stocks already outperformed the market this year.