Our extensive research has shown that imitating the smart money can generate significant returns for retail investors, which is why we track nearly 750 active prominent money managers and analyze their quarterly 13F filings. The stocks that are heavily bought by hedge funds historically outperformed the market, though there is no shortage of high profile failures like hedge funds’ recent losses in Facebook. Let’s take a closer look at what the funds we track think about Green Dot Corporation (NYSE:GDOT) in this article.

Green Dot Corporation (NYSE:GDOT) has seen a decrease in hedge fund interest in recent months. Our calculations also showed that GDOT isn’t among the 30 most popular stocks among hedge funds.

In the 21st century investor’s toolkit there are a lot of gauges investors employ to appraise stocks. A couple of the best gauges are hedge fund and insider trading interest. Our researchers have shown that, historically, those who follow the top picks of the best hedge fund managers can outpace the market by a significant amount (see the details here).

How have hedgies been trading Green Dot Corporation (NYSE:GDOT)?

At the end of the fourth quarter, a total of 19 of the hedge funds tracked by Insider Monkey were long this stock, a change of -5% from the previous quarter. Below, you can check out the change in hedge fund sentiment towards GDOT over the last 14 quarters. So, let’s see which hedge funds were among the top holders of the stock and which hedge funds were making big moves. 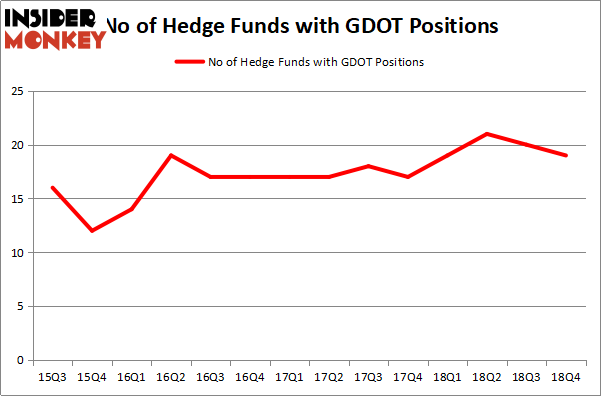 Of the funds tracked by Insider Monkey, Renaissance Technologies, managed by Jim Simons, holds the most valuable position in Green Dot Corporation (NYSE:GDOT). Renaissance Technologies has a $109.2 million position in the stock, comprising 0.1% of its 13F portfolio. The second largest stake is held by Columbus Circle Investors, led by Principal Global Investors, holding a $63.5 million position; 1.8% of its 13F portfolio is allocated to the company. Remaining members of the smart money that are bullish encompass John Overdeck and David Siegel’s Two Sigma Advisors, Josh Goldberg’s G2 Investment Partners Management and Christopher James’s Partner Fund Management.

Since Green Dot Corporation (NYSE:GDOT) has faced a decline in interest from the smart money, we can see that there is a sect of hedgies that slashed their positions entirely by the end of the third quarter. Interestingly, David Costen Haley’s HBK Investments dropped the biggest position of the “upper crust” of funds tracked by Insider Monkey, totaling close to $1.4 million in stock. Noam Gottesman’s fund, GLG Partners, also cut its stock, about $0.8 million worth. These bearish behaviors are important to note, as aggregate hedge fund interest fell by 1 funds by the end of the third quarter.

As you can see these stocks had an average of 21.5 hedge funds with bullish positions and the average amount invested in these stocks was $200 million. That figure was $266 million in GDOT’s case. Western Alliance Bancorporation (NYSE:WAL) is the most popular stock in this table. On the other hand Cinemark Holdings, Inc. (NYSE:CNK) is the least popular one with only 17 bullish hedge fund positions. Green Dot Corporation (NYSE:GDOT) is not the least popular stock in this group but hedge fund interest is still below average. This is a slightly negative signal and we’d rather spend our time researching stocks that hedge funds are piling on. Our calculations showed that top 15 most popular stocks) among hedge funds returned 24.2% through April 22nd and outperformed the S&P 500 ETF (SPY) by more than 7 percentage points. Unfortunately GDOT wasn’t nearly as popular as these 15 stock (hedge fund sentiment was quite bearish); GDOT investors were disappointed as the stock returned -23.3% and underperformed the market. If you are interested in investing in large cap stocks with huge upside potential, you should check out the top 15 most popular stocks) among hedge funds as 13 of these stocks already outperformed the market this year.