It was a rough fourth quarter for many hedge funds, which were naturally unable to overcome the big dip in the broad market, as the S&P 500 fell by about 4.8% during 2018 and average hedge fund losing about 1%. The Russell 2000, composed of smaller companies, performed even worse, trailing the S&P by more than 6 percentage points, as investors fled less-known quantities for safe havens. Luckily hedge funds were shifting their holdings into large-cap stocks. The 20 most popular hedge fund stocks actually generated an average return of 24.4% during the first 9 months of 2019 and outperformed the S&P 500 ETF by 4 percentage points. We are done processing the latest 13f filings and in this article we will study how hedge fund sentiment towards GoPro Inc (NASDAQ:GPRO) changed during the first quarter.

GoPro Inc (NASDAQ:GPRO) has experienced a decrease in enthusiasm from smart money lately. Our calculations also showed that GPRO isn’t among the 30 most popular stocks among hedge funds (see the video below). 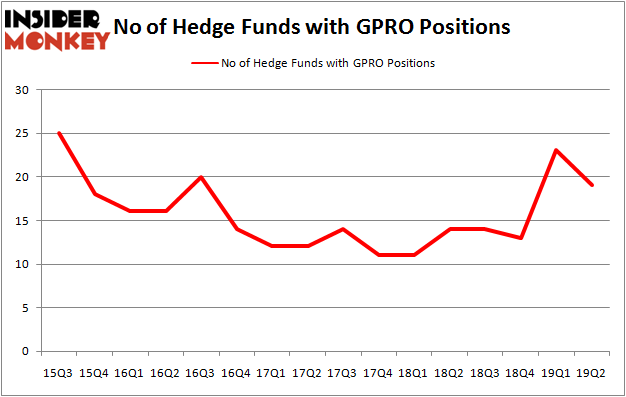 What does smart money think about GoPro Inc (NASDAQ:GPRO)?

At Q2’s end, a total of 19 of the hedge funds tracked by Insider Monkey held long positions in this stock, a change of -17% from one quarter earlier. The graph below displays the number of hedge funds with bullish position in GPRO over the last 16 quarters. With hedgies’ positions undergoing their usual ebb and flow, there exists a few key hedge fund managers who were upping their holdings considerably (or already accumulated large positions).

More specifically, Lynrock Lake was the largest shareholder of GoPro Inc (NASDAQ:GPRO), with a stake worth $58.3 million reported as of the end of March. Trailing Lynrock Lake was D E Shaw, which amassed a stake valued at $41.6 million. Renaissance Technologies, Millennium Management, and Two Sigma Advisors were also very fond of the stock, giving the stock large weights in their portfolios.

Judging by the fact that GoPro Inc (NASDAQ:GPRO) has faced a decline in interest from the aggregate hedge fund industry, it’s safe to say that there were a few hedge funds who sold off their full holdings by the end of the second quarter. Interestingly, Lee Ainslie’s Maverick Capital sold off the largest stake of the “upper crust” of funds followed by Insider Monkey, comprising an estimated $26.5 million in stock. David Costen Haley’s fund, HBK Investments, also dumped its stock, about $7.9 million worth. These transactions are intriguing to say the least, as total hedge fund interest dropped by 4 funds by the end of the second quarter.

Let’s go over hedge fund activity in other stocks – not necessarily in the same industry as GoPro Inc (NASDAQ:GPRO) but similarly valued. We will take a look at NorthStar Realty Europe Corp. (NYSE:NRE), ViewRay, Inc. (NASDAQ:VRAY), US Concrete Inc (NASDAQ:USCR), and Berry Petroleum Corporation (NASDAQ:BRY). This group of stocks’ market valuations are similar to GPRO’s market valuation.

As you can see these stocks had an average of 16 hedge funds with bullish positions and the average amount invested in these stocks was $183 million. That figure was $190 million in GPRO’s case. Berry Petroleum Corporation (NASDAQ:BRY) is the most popular stock in this table. On the other hand NorthStar Realty Europe Corp. (NYSE:NRE) is the least popular one with only 12 bullish hedge fund positions. Compared to these stocks GoPro Inc (NASDAQ:GPRO) is more popular among hedge funds. Our calculations showed that top 20 most popular stocks among hedge funds returned 24.4% in 2019 through September 30th and outperformed the S&P 500 ETF (SPY) by 4 percentage points. Unfortunately GPRO wasn’t nearly as popular as these 20 stocks and hedge funds that were betting on GPRO were disappointed as the stock returned -5% during the third quarter and underperformed the market. If you are interested in investing in large cap stocks with huge upside potential, you should check out the top 20 most popular stocks among hedge funds as many of these stocks already outperformed the market in Q3.