Concerns over rising interest rates and expected further rate increases have hit several stocks hard during the fourth quarter. NASDAQ and Russell 2000 indices were already in correction territory. More importantly, Russell 2000 ETF (IWM) underperformed the larger S&P 500 ETF (SPY) by nearly 7 percentage points in the fourth quarter. Hedge funds and institutional investors tracked by Insider Monkey usually invest a disproportionate amount of their portfolios in smaller cap stocks. We have been receiving indications that hedge funds were paring back their overall exposure and this is one of the factors behind the recent movements in major indices. In this article, we will take a closer look at hedge fund sentiment towards Golar LNG Partners LP (NASDAQ:GMLP).

Golar LNG Partners LP (NASDAQ:GMLP) shareholders have witnessed a decrease in activity from the world’s largest hedge funds of late. GMLP was in 4 hedge funds’ portfolios at the end of December. There were 6 hedge funds in our database with GMLP holdings at the end of the previous quarter. Our calculations also showed that GMLP isn’t among the 30 most popular stocks among hedge funds.

In the financial world there are dozens of signals investors put to use to assess publicly traded companies. A couple of the less utilized signals are hedge fund and insider trading sentiment. Our experts have shown that, historically, those who follow the best picks of the elite money managers can trounce their index-focused peers by a significant amount (see the details here).

What does the smart money think about Golar LNG Partners LP (NASDAQ:GMLP)? 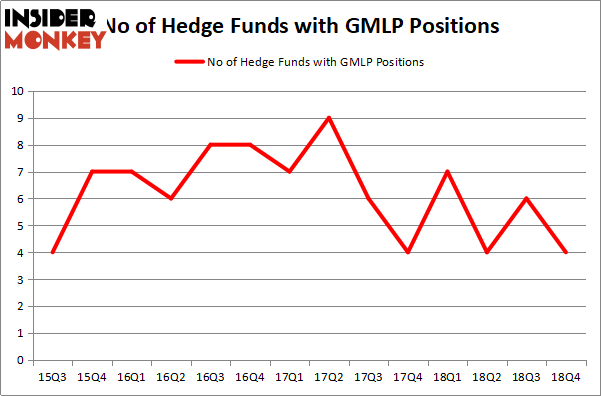 Among these funds, Huber Capital Management held the most valuable stake in Golar LNG Partners LP (NASDAQ:GMLP), which was worth $23.3 million at the end of the fourth quarter. On the second spot was Renaissance Technologies which amassed $2.2 million worth of shares. Moreover, Millennium Management and Citadel Investment Group were also bullish on Golar LNG Partners LP (NASDAQ:GMLP), allocating a large percentage of their portfolios to this stock.

Seeing as Golar LNG Partners LP (NASDAQ:GMLP) has faced bearish sentiment from the entirety of the hedge funds we track, it’s safe to say that there is a sect of hedgies that elected to cut their full holdings in the third quarter. It’s worth mentioning that Guy Shahar’s DSAM Partners dropped the largest investment of all the hedgies tracked by Insider Monkey, valued at close to $2.1 million in stock. Kenneth Tropin’s fund, Graham Capital Management, also dropped its stock, about $1.1 million worth. These bearish behaviors are intriguing to say the least, as aggregate hedge fund interest was cut by 2 funds in the third quarter.

Let’s now take a look at hedge fund activity in other stocks – not necessarily in the same industry as Golar LNG Partners LP (NASDAQ:GMLP) but similarly valued. We will take a look at Unitil Corporation (NYSE:UTL), Radius Health Inc (NASDAQ:RDUS), Regis Corporation (NYSE:RGS), and Tekla Healthcare Investors (NYSE:HQH). This group of stocks’ market valuations are similar to GMLP’s market valuation.

As you can see these stocks had an average of 10.25 hedge funds with bullish positions and the average amount invested in these stocks was $151 million. That figure was $27 million in GMLP’s case. Radius Health Inc (NASDAQ:RDUS) is the most popular stock in this table. On the other hand Tekla Healthcare Investors (NYSE:HQH) is the least popular one with only 3 bullish hedge fund positions. Golar LNG Partners LP (NASDAQ:GMLP) is not the least popular stock in this group but hedge fund interest is still below average. Our calculations showed that top 15 most popular stocks) among hedge funds returned 24.2% through April 22nd and outperformed the S&P 500 ETF (SPY) by more than 7 percentage points. A small number of hedge funds were also right about betting on GMLP, though not to the same extent, as the stock returned 20% and outperformed the market as well.