While the market driven by short-term sentiment influenced by uncertainty regarding the future of the interest rate environment in the US, declining oil prices and the trade war with China, many smart money investors kept their optimism regarding the current bull run in the fourth quarter, while still hedging many of their long positions. However, as we know, big investors usually buy stocks with strong fundamentals, which is why we believe we can profit from imitating them. In this article, we are going to take a look at the smart money sentiment surrounding Gerdau SA (NYSE:GGB).

Is Gerdau SA (NYSE:GGB) undervalued? Prominent investors are becoming less hopeful. The number of bullish hedge fund bets dropped by 3 in recent months. Our calculations also showed that GGB isn’t among the 30 most popular stocks among hedge funds.

What does the smart money think about Gerdau SA (NYSE:GGB)?

At the end of the fourth quarter, a total of 12 of the hedge funds tracked by Insider Monkey were long this stock, a change of -20% from one quarter earlier. By comparison, 14 hedge funds held shares or bullish call options in GGB a year ago. With hedge funds’ sentiment swirling, there exists a select group of noteworthy hedge fund managers who were adding to their stakes substantially (or already accumulated large positions). 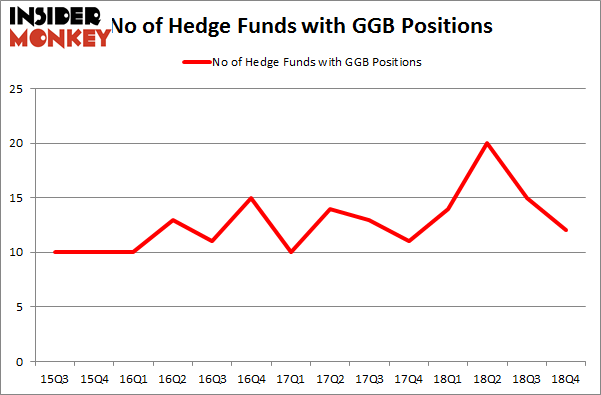 Seeing as Gerdau SA (NYSE:GGB) has experienced declining sentiment from the entirety of the hedge funds we track, logic holds that there were a few funds that decided to sell off their entire stakes last quarter. Interestingly, Ken Heebner’s Capital Growth Management dumped the biggest position of the “upper crust” of funds watched by Insider Monkey, totaling an estimated $84.2 million in stock, and Paul Marshall and Ian Wace’s Marshall Wace LLP was right behind this move, as the fund cut about $5.1 million worth. These transactions are interesting, as total hedge fund interest fell by 3 funds last quarter.

As you can see these stocks had an average of 26.75 hedge funds with bullish positions and the average amount invested in these stocks was $735 million. That figure was $143 million in GGB’s case. The Madison Square Garden Company (NYSE:MSG) is the most popular stock in this table. On the other hand Kilroy Realty Corp (NYSE:KRC) is the least popular one with only 13 bullish hedge fund positions. Compared to these stocks Gerdau SA (NYSE:GGB) is even less popular than KRC. Considering that hedge funds aren’t fond of this stock in relation to other companies analyzed in this article, it may be a good idea to analyze it in detail and understand why the smart money isn’t behind this stock. This isn’t necessarily bad news. Although it is possible that hedge funds may think the stock is overpriced and view the stock as a short candidate, they may not be very familiar with the bullish thesis. Our calculations showed that top 15 most popular stocks among hedge funds returned 21.3% through April 8th and outperformed the S&P 500 ETF (SPY) by more than 5 percentage points. Unfortunately GGB wasn’t in this group. Hedge funds that bet on GGB were disappointed as the stock returned 10.9% and underperformed the market. If you are interested in investing in large cap stocks, you should check out the top 15 hedge fund stocks as 12 of these outperformed the market.

Do Hedge Funds Love Enel Chile S.A. (NYSE:ENIC)?
Monthly Newsletter Strategy
Download a free copy of our newsletter and see the details inside!
Hedge Fund Resource Center
Related News
How Gerdau SA (ADR) (GGB) Stacks Up Against Its Peers? Contrarian Capital’s Stock Picks Like American Airlines Group Inc (AAL) Have a Positive Impact on Its Returns Deutsche Bank Fine Hits Credit Suisse and RBS Hard, Plus 3 Other Stocks That Are Getting Beaten Down Today Distressed Securities-Focused Investor Bought These Five Stocks; Should You Follow? What Is Going On With These 5 Falling Stocks? What is Causing These 5 Stocks to Move Sharply on Friday? Why These Five Stocks Are Gaining Ground Today 20 Clever Bumble Bios for Guys 15 Most Physically Demanding Olympic Sports Hedge Funds Have Never Been This Bullish On Visa Inc (V)
Billionaire Hedge Funds