Legendary investors such as Jeffrey Talpins and Seth Klarman earn enormous amounts of money for themselves and their investors by doing in-depth research on small-cap stocks that big brokerage houses don’t publish. Small cap stocks -especially when they are screened well- can generate substantial outperformance versus a boring index fund. That’s why we analyze the activity of those elite funds in these small-cap stocks. In the following paragraphs, we analyze Franks International NV (NYSE:FI) from the perspective of those elite funds.

Hedge fund interest in Franks International NV (NYSE:FI) shares was flat at the end of last quarter. This is usually a negative indicator. At the end of this article we will also compare FI to other stocks including IMAX Corporation (NYSE:IMAX), Central Puerto S.A. (NYSE:CEPU), and Aimmune Therapeutics Inc (NASDAQ:AIMT) to get a better sense of its popularity.

What have hedge funds been doing with Franks International NV (NYSE:FI)?

At the end of the first quarter, a total of 12 of the hedge funds tracked by Insider Monkey were bullish on this stock, a change of 0% from one quarter earlier. The graph below displays the number of hedge funds with bullish position in FI over the last 15 quarters. With the smart money’s sentiment swirling, there exists a select group of noteworthy hedge fund managers who were upping their holdings substantially (or already accumulated large positions). 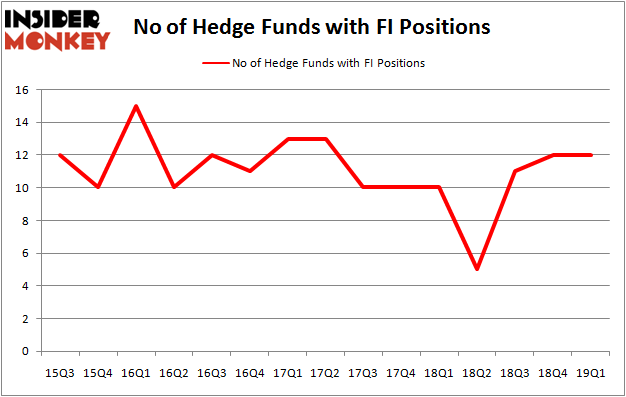 When looking at the institutional investors followed by Insider Monkey, First Pacific Advisors LLC, managed by Robert Rodriguez and Steven Romick, holds the biggest position in Franks International NV (NYSE:FI). First Pacific Advisors LLC has a $10 million position in the stock, comprising 0.1% of its 13F portfolio. Coming in second is Phill Gross and Robert Atchinson of Adage Capital Management, with a $6.1 million position; the fund has less than 0.1%% of its 13F portfolio invested in the stock. Some other members of the smart money with similar optimism include D. E. Shaw’s D E Shaw, Ken Griffin’s Citadel Investment Group and Peter Rathjens, Bruce Clarke and John Campbell’s Arrowstreet Capital.

Judging by the fact that Franks International NV (NYSE:FI) has faced bearish sentiment from the aggregate hedge fund industry, logic holds that there were a few money managers that decided to sell off their positions entirely by the end of the third quarter. Interestingly, Benjamin A. Smith’s Laurion Capital Management sold off the biggest stake of all the hedgies tracked by Insider Monkey, totaling close to $1.3 million in stock. Chuck Royce’s fund, Royce & Associates, also sold off its stock, about $0.6 million worth. These bearish behaviors are interesting, as total hedge fund interest stayed the same (this is a bearish signal in our experience).

As you can see these stocks had an average of 15.25 hedge funds with bullish positions and the average amount invested in these stocks was $96 million. That figure was $24 million in FI’s case. Ambarella Inc (NASDAQ:AMBA) is the most popular stock in this table. On the other hand Central Puerto S.A. (NYSE:CEPU) is the least popular one with only 12 bullish hedge fund positions. Compared to these stocks Franks International NV (NYSE:FI) is even less popular than CEPU. Hedge funds dodged a bullet by taking a bearish stance towards FI. Our calculations showed that the top 20 most popular hedge fund stocks returned 6.2% in Q2 through June 19th and outperformed the S&P 500 ETF (SPY) by nearly 3 percentage points. Unfortunately FI wasn’t nearly as popular as these 20 stocks (hedge fund sentiment was very bearish); FI investors were disappointed as the stock returned 1.3% during the same time frame and underperformed the market. If you are interested in investing in large cap stocks with huge upside potential, you should check out the top 20 most popular stocks among hedge funds as 13 of these stocks already outperformed the market so far in the second quarter.