Our extensive research has shown that imitating the smart money can generate significant returns for retail investors, which is why we track nearly 750 active prominent money managers and analyze their quarterly 13F filings. The stocks that are heavily bought by hedge funds historically outperformed the market, though there is no shortage of high profile failures like hedge funds’ recent losses in Facebook. Let’s take a closer look at what the funds we track think about Flexion Therapeutics Inc (NASDAQ:FLXN) in this article.

Flexion Therapeutics Inc (NASDAQ:FLXN) investors should pay attention to a decrease in support from the world’s most elite money managers in recent months. Our calculations also showed that FLXN isn’t among the 30 most popular stocks among hedge funds.

How have hedgies been trading Flexion Therapeutics Inc (NASDAQ:FLXN)?

At the end of the fourth quarter, a total of 14 of the hedge funds tracked by Insider Monkey were long this stock, a change of -7% from the second quarter of 2018. By comparison, 15 hedge funds held shares or bullish call options in FLXN a year ago. With hedge funds’ sentiment swirling, there exists a select group of key hedge fund managers who were upping their stakes considerably (or already accumulated large positions). 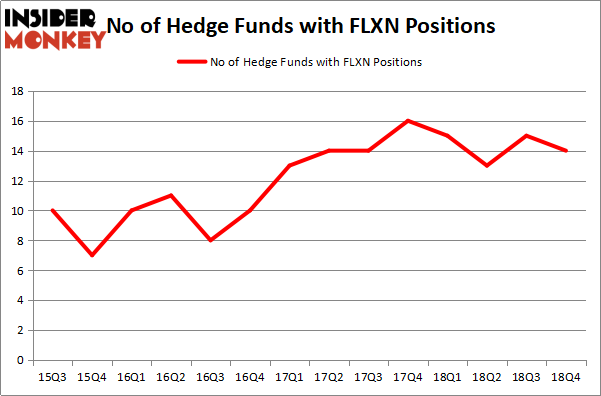 More specifically, Point72 Asset Management was the largest shareholder of Flexion Therapeutics Inc (NASDAQ:FLXN), with a stake worth $13.5 million reported as of the end of December. Trailing Point72 Asset Management was Carlson Capital, which amassed a stake valued at $9.1 million. Rubric Capital Management, Kingdon Capital, and Armistice Capital were also very fond of the stock, giving the stock large weights in their portfolios.

Since Flexion Therapeutics Inc (NASDAQ:FLXN) has witnessed a decline in interest from the smart money, it’s easy to see that there lies a certain “tier” of hedgies that slashed their positions entirely last quarter. Intriguingly, Philip Hempleman’s Ardsley Partners said goodbye to the largest investment of all the hedgies watched by Insider Monkey, comprising close to $7.8 million in stock, and William Harnisch’s Peconic Partners LLC was right behind this move, as the fund dumped about $4.2 million worth. These bearish behaviors are important to note, as aggregate hedge fund interest dropped by 1 funds last quarter.

As you can see these stocks had an average of 8 hedge funds with bullish positions and the average amount invested in these stocks was $35 million. That figure was $51 million in FLXN’s case. Atlantic Capital Bancshares, Inc. (NASDAQ:ACBI) is the most popular stock in this table. On the other hand Yintech Investment Holdings Limited (NASDAQ:YIN) is the least popular one with only 2 bullish hedge fund positions. Flexion Therapeutics Inc (NASDAQ:FLXN) is not the most popular stock in this group but hedge fund interest is still above average. This is a slightly positive signal but we’d rather spend our time researching stocks that hedge funds are piling on. Our calculations showed that top 15 most popular stocks) among hedge funds returned 24.2% through April 22nd and outperformed the S&P 500 ETF (SPY) by more than 7 percentage points. Unfortunately FLXN wasn’t nearly as popular as these 15 stock and hedge funds that were betting on FLXN were disappointed as the stock returned -9.6% and underperformed the market. If you are interested in investing in large cap stocks with huge upside potential, you should check out the top 15 most popular stocks) among hedge funds as 13 of these stocks already outperformed the market this year.

Jumia’s Share Price Drops In the Aftermath of Citron Research’s Proclaiming...
Monthly Newsletter Strategy
Download a free copy of our newsletter and see the details inside!
Hedge Fund Resource Center
Related News
Chevron, Conduent, Flexion, and More: Stocks in the Spotlight Should You Avoid Flexion Therapeutics Inc (FLXN)? 5 Stocks That Are Getting Battered and Bruised Today Is Flexion Therapeutics Inc (FLXN) A Good Stock To Buy? Smart Money Don’t Bet on Three Biotech Stocks that Slumped Today and You Should Not Too 25 Cities with the Most Unfaithful Wives 6 Easiest Programming Languages for Middle School Students 18 Cute Tinder Bio Examples (Female)
Billionaire Hedge Funds