Concerns over rising interest rates and expected further rate increases have hit several stocks hard during the fourth quarter of 2018. Trends reversed 180 degrees during the first half of 2019 amid Powell’s pivot and optimistic expectations towards a trade deal with China. Hedge funds and institutional investors tracked by Insider Monkey usually invest a disproportionate amount of their portfolios in smaller cap stocks. We have been receiving indications that hedge funds were increasing their overall exposure in the second quarter and this is one of the factors behind the recent movements in major indices. In this article, we will take a closer look at hedge fund sentiment towards First Foundation Inc (NASDAQ:FFWM).

Is First Foundation Inc (NASDAQ:FFWM) a bargain? The smart money is becoming less confident. The number of bullish hedge fund bets decreased by 1 recently. Our calculations also showed that FFWM isn’t among the 30 most popular stocks among hedge funds (see the video below).

If you’d ask most shareholders, hedge funds are perceived as worthless, outdated financial tools of the past. While there are over 8000 funds in operation at present, We choose to focus on the masters of this group, around 750 funds. These hedge fund managers direct the lion’s share of the hedge fund industry’s total asset base, and by keeping track of their top picks, Insider Monkey has brought to light a few investment strategies that have historically outrun Mr. Market. Insider Monkey’s flagship hedge fund strategy surpassed the S&P 500 index by around 5 percentage points per year since its inception in May 2014. We were able to generate large returns even by identifying short candidates. Our portfolio of short stocks lost 25.7% since February 2017 (through September 30th) even though the market was up more than 33% during the same period. We just shared a list of 10 short targets in our latest quarterly update . 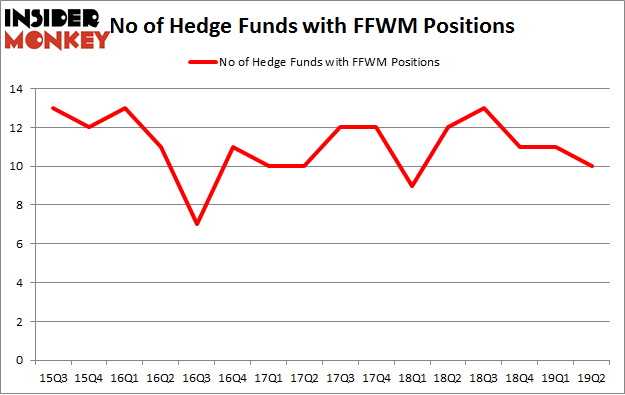 More specifically, Endicott Management was the largest shareholder of First Foundation Inc (NASDAQ:FFWM), with a stake worth $15.4 million reported as of the end of March. Trailing Endicott Management was Basswood Capital, which amassed a stake valued at $14.6 million. Mendon Capital Advisors, Millennium Management, and Azora Capital were also very fond of the stock, giving the stock large weights in their portfolios.

Due to the fact that First Foundation Inc (NASDAQ:FFWM) has experienced declining sentiment from the smart money, it’s easy to see that there exists a select few fund managers that decided to sell off their entire stakes in the second quarter. At the top of the heap, Emanuel J. Friedman’s EJF Capital dropped the biggest position of the 750 funds followed by Insider Monkey, valued at an estimated $3.4 million in stock. Paul Marshall and Ian Wace’s fund, Marshall Wace LLP, also dumped its stock, about $0.8 million worth. These moves are important to note, as aggregate hedge fund interest was cut by 1 funds in the second quarter.

As you can see these stocks had an average of 7 hedge funds with bullish positions and the average amount invested in these stocks was $43 million. That figure was $77 million in FFWM’s case. Veeco Instruments Inc. (NASDAQ:VECO) is the most popular stock in this table. On the other hand Watford Holdings Ltd. (NASDAQ:WTRE) is the least popular one with only 3 bullish hedge fund positions. First Foundation Inc (NASDAQ:FFWM) is not the most popular stock in this group but hedge fund interest is still above average. Our calculations showed that top 20 most popular stocks among hedge funds returned 24.4% in 2019 through September 30th and outperformed the S&P 500 ETF (SPY) by 4 percentage points. Hedge funds were also right about betting on FFWM as the stock returned 14.1% during the third quarter and outperformed the market. Hedge funds were rewarded for their relative bullishness.