Investing in small cap stocks has historically been a way to outperform the market, as small cap companies typically grow faster on average than the blue chips. That outperformance comes with a price, however, as there are occasional periods of higher volatility. The fourth quarter of 2018 is one of those periods, as the Russell 2000 ETF (IWM) has underperformed the larger S&P 500 ETF (SPY) by nearly 7 percentage points. Given that the funds we track tend to have a disproportionate amount of their portfolios in smaller cap stocks, they have seen some volatility in their portfolios too. Actually their moves are potentially one of the factors that contributed to this volatility. In this article, we use our extensive database of hedge fund holdings to find out what the smart money thinks of Expeditors International of Washington, Inc. (NASDAQ:EXPD).

Expeditors International of Washington, Inc. (NASDAQ:EXPD) investors should pay attention to an increase in activity from the world’s largest hedge funds in recent months. EXPD was in 24 hedge funds’ portfolios at the end of December. There were 22 hedge funds in our database with EXPD positions at the end of the previous quarter. Our calculations also showed that EXPD isn’t among the 30 most popular stocks among hedge funds.

In the eyes of most traders, hedge funds are perceived as slow, outdated investment vehicles of years past. While there are more than 8000 funds with their doors open at present, Our experts look at the top tier of this club, about 750 funds. These hedge fund managers watch over most of the smart money’s total capital, and by keeping an eye on their first-class equity investments, Insider Monkey has revealed numerous investment strategies that have historically outpaced Mr. Market. Insider Monkey’s flagship hedge fund strategy outperformed the S&P 500 index by nearly 5 percentage points annually since its inception in May 2014 through early November 2018. We were able to generate large returns even by identifying short candidates. Our portfolio of short stocks lost 27.5% since February 2017 (through March 12th) even though the market was up nearly 25% during the same period. We just shared a list of 6 short targets in our latest quarterly update and they are already down an average of 6% in less than a month. 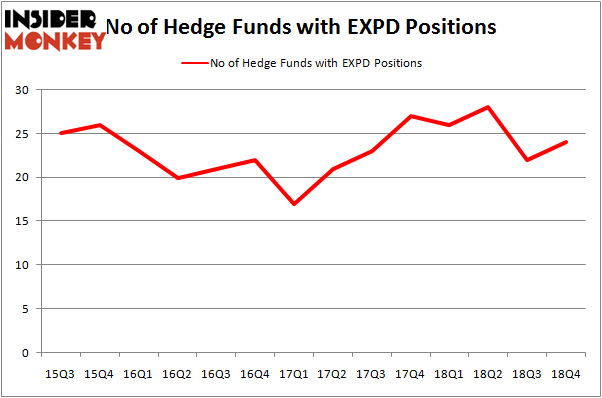 Of the funds tracked by Insider Monkey, Select Equity Group, managed by Robert Joseph Caruso, holds the biggest position in Expeditors International of Washington, Inc. (NASDAQ:EXPD). Select Equity Group has a $312.4 million position in the stock, comprising 2.4% of its 13F portfolio. The second largest stake is held by AQR Capital Management, managed by Cliff Asness, which holds a $78.4 million position; 0.1% of its 13F portfolio is allocated to the company. Other peers that hold long positions include Douglas Dossey and Arthur Young’s Tensile Capital, Ken Griffin’s Citadel Investment Group and Noam Gottesman’s GLG Partners.

As industrywide interest jumped, key hedge funds were breaking ground themselves. Renaissance Technologies, managed by Jim Simons, created the largest position in Expeditors International of Washington, Inc. (NASDAQ:EXPD). Renaissance Technologies had $15.5 million invested in the company at the end of the quarter. Jeffrey Talpins’s Element Capital Management also made a $1.6 million investment in the stock during the quarter. The other funds with brand new EXPD positions are Israel Englander’s Millennium Management, Hoon Kim’s Quantinno Capital, and Claes Fornell’s CSat Investment Advisory.

As you can see these stocks had an average of 33 hedge funds with bullish positions and the average amount invested in these stocks was $920 million. That figure was $626 million in EXPD’s case. Take-Two Interactive Software, Inc. (NASDAQ:TTWO) is the most popular stock in this table. On the other hand Telecom Italia S.p.A. (NYSE:TI) is the least popular one with only 3 bullish hedge fund positions. Expeditors International of Washington, Inc. (NASDAQ:EXPD) is not the least popular stock in this group but hedge fund interest is still below average. This is a slightly negative signal and we’d rather spend our time researching stocks that hedge funds are piling on. Our calculations showed that top 15 most popular stocks among hedge funds returned 19.7% through March 15th and outperformed the S&P 500 ETF (SPY) by 6.6 percentage points. Unfortunately EXPD wasn’t in this group. Hedge funds that bet on EXPD were disappointed as the stock returned 11.6% and underperformed the market. If you are interested in investing in large cap stocks, you should check out the top 15 hedge fund stocks as 13 of these outperformed the market.