Insider Monkey has processed numerous 13F filings of hedge funds and successful investors to create an extensive database of hedge fund holdings. The 13F filings show the hedge funds’ and successful investors’ positions as of the end of the first quarter. You can find write-ups about an individual hedge fund’s trades on numerous financial news websites. However, in this article we will take a look at their collective moves and analyze what the smart money thinks of EVO Payments, Inc. (NASDAQ:EVOP) based on that data.

Is EVO Payments, Inc. (NASDAQ:EVOP) going to take off soon? The smart money is taking a bullish view. The number of long hedge fund positions moved up by 3 in recent months. Our calculations also showed that EVOP isn’t among the 30 most popular stocks among hedge funds.

What have hedge funds been doing with EVO Payments, Inc. (NASDAQ:EVOP)?

At Q1’s end, a total of 13 of the hedge funds tracked by Insider Monkey were bullish on this stock, a change of 30% from the previous quarter. The graph below displays the number of hedge funds with bullish position in EVOP over the last 15 quarters. With hedgies’ capital changing hands, there exists a few notable hedge fund managers who were boosting their holdings significantly (or already accumulated large positions). 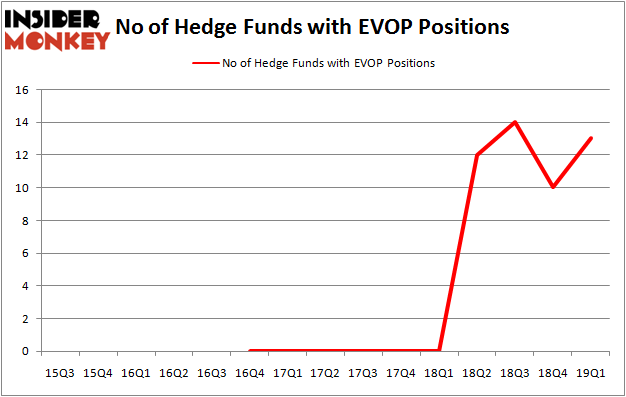 The largest stake in EVO Payments, Inc. (NASDAQ:EVOP) was held by Greenhouse Funds, which reported holding $18.4 million worth of stock at the end of March. It was followed by Select Equity Group with a $17.9 million position. Other investors bullish on the company included Adage Capital Management, D E Shaw, and Arrowstreet Capital.

As you can see these stocks had an average of 19.25 hedge funds with bullish positions and the average amount invested in these stocks was $178 million. That figure was $61 million in EVOP’s case. Mednax Inc. (NYSE:MD) is the most popular stock in this table. On the other hand Granite Real Estate Investment Trust (NYSE:GRP) is the least popular one with only 13 bullish hedge fund positions. Compared to these stocks EVO Payments, Inc. (NASDAQ:EVOP) is even less popular than GRP. Our calculations showed that top 20 most popular stocks among hedge funds returned 6.2% in Q2 through June 19th and outperformed the S&P 500 ETF (SPY) by nearly 3 percentage points. A small number of hedge funds were also right about betting on EVOP, though not to the same extent, as the stock returned 4% during the same time frame and outperformed the market as well.