Does Evertec Inc (NYSE:EVTC) represent a good buying opportunity at the moment? Let’s briefly check the hedge fund interest towards the company. Hedge fund firms constantly search out bright intellectuals and highly-experienced employees and throw away millions of dollars on satellite photos and other research activities, so it is no wonder why they tend to generate millions in profits each year. It is also true that some hedge fund players fail inconceivably on some occasions, but net net their stock picks have been generating superior risk-adjusted returns on average over the years.

Is Evertec Inc (NYSE:EVTC) a cheap investment now? Investors who are in the know are taking an optimistic view. The number of bullish hedge fund bets increased by 1 recently. Our calculations also showed that evtc isn’t among the 30 most popular stocks among hedge funds. EVTC was in 21 hedge funds’ portfolios at the end of December. There were 20 hedge funds in our database with EVTC holdings at the end of the previous quarter. 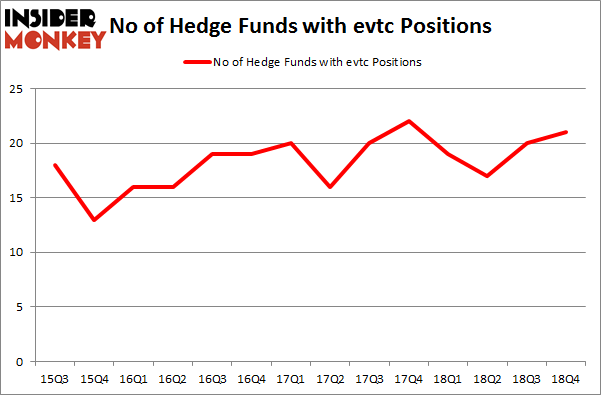 More specifically, Renaissance Technologies was the largest shareholder of Evertec Inc (NYSE:EVTC), with a stake worth $52.9 million reported as of the end of September. Trailing Renaissance Technologies was Rivulet Capital, which amassed a stake valued at $47.6 million. GLG Partners, Millennium Management, and AQR Capital Management were also very fond of the stock, giving the stock large weights in their portfolios.