Like everyone else, elite investors make mistakes. Some of their top consensus picks, such as Amazon, Facebook and Alibaba, have not done well in Q4 due to various reasons. Nevertheless, the data show elite investors’ consensus picks have done well on average over the long-term. The top 15 S&P 500 stocks among hedge funds at the end of September 2018 returned an average of 1% through March 15th whereas the S&P 500 Index ETF lost 2.2% during the same period. Because their consensus picks have done well, we pay attention to what elite funds think before doing extensive research on a stock. In this article, we take a closer look at Equifax Inc. (NYSE:EFX) from the perspective of those elite funds.

Equifax Inc. (NYSE:EFX) was in 22 hedge funds’ portfolios at the end of the fourth quarter of 2018. EFX investors should be aware of a decrease in hedge fund sentiment of late. There were 35 hedge funds in our database with EFX positions at the end of the previous quarter. Our calculations also showed that EFX isn’t among the 30 most popular stocks among hedge funds.

At the end of the fourth quarter, a total of 22 of the hedge funds tracked by Insider Monkey held long positions in this stock, a change of -37% from the previous quarter. Below, you can check out the change in hedge fund sentiment towards EFX over the last 14 quarters. With the smart money’s capital changing hands, there exists a few notable hedge fund managers who were increasing their stakes meaningfully (or already accumulated large positions). 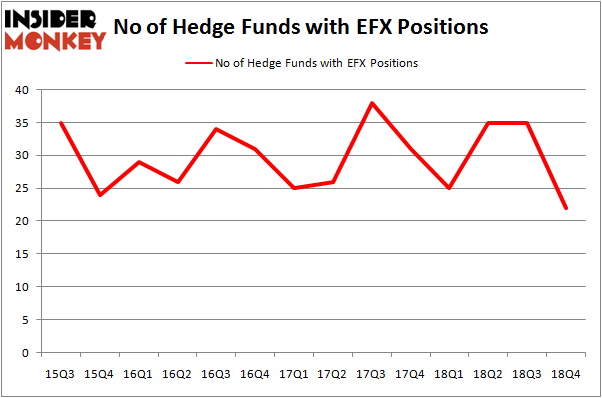 Due to the fact that Equifax Inc. (NYSE:EFX) has experienced a decline in interest from the aggregate hedge fund industry, logic holds that there exists a select few hedgies that decided to sell off their entire stakes in the third quarter. Interestingly, Doug Silverman and Alexander Klabin’s Senator Investment Group dumped the largest stake of the “upper crust” of funds tracked by Insider Monkey, valued at close to $280.7 million in stock, and Dmitry Balyasny’s Balyasny Asset Management was right behind this move, as the fund dropped about $132.3 million worth. These transactions are interesting, as total hedge fund interest fell by 13 funds in the third quarter.

As you can see these stocks had an average of 33.25 hedge funds with bullish positions and the average amount invested in these stocks was $715 million. That figure was $785 million in EFX’s case. E*TRADE Financial Corporation (NASDAQ:ETFC) is the most popular stock in this table. On the other hand Copart, Inc. (NASDAQ:CPRT) is the least popular one with only 28 bullish hedge fund positions. Compared to these stocks Equifax Inc. (NYSE:EFX) is even less popular than CPRT. Considering that hedge funds aren’t fond of this stock in relation to other companies analyzed in this article, it may be a good idea to analyze it in detail and understand why the smart money isn’t behind this stock. This isn’t necessarily bad news. Although it is possible that hedge funds may think the stock is overpriced and view the stock as a short candidate, they may not be very familiar with the bullish thesis. Our calculations showed that top 15 most popular stocks among hedge funds returned 19.7% through March 15th and outperformed the S&P 500 ETF (SPY) by 6.6 percentage points. Hedge funds were also right about betting on EFX, though not to the same extent, as the stock returned 19.6% and outperformed the market as well.