Encompass Health Corporation (NYSE:EHC) investors should pay attention to an increase in hedge fund sentiment recently. Our calculations also showed that EHC isn’t among the 30 most popular stocks among hedge funds. 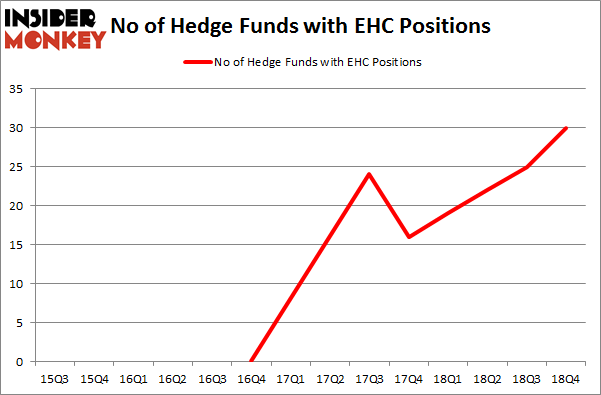 Among these funds, Renaissance Technologies held the most valuable stake in Encompass Health Corporation (NYSE:EHC), which was worth $133.1 million at the end of the third quarter. On the second spot was Rock Springs Capital Management which amassed $44.7 million worth of shares. Moreover, Two Sigma Advisors, D E Shaw, and Citadel Investment Group were also bullish on Encompass Health Corporation (NYSE:EHC), allocating a large percentage of their portfolios to this stock.

Let’s also examine hedge fund activity in other stocks – not necessarily in the same industry as Encompass Health Corporation (NYSE:EHC) but similarly valued. We will take a look at Aqua America Inc (NYSE:WTR), WGP Group (NYSE:WGP), IPG Photonics Corporation (NASDAQ:IPGP), and WEX Inc (NYSE:WEX). All of these stocks’ market caps are similar to EHC’s market cap.

As you can see these stocks had an average of 18.5 hedge funds with bullish positions and the average amount invested in these stocks was $178 million. That figure was $418 million in EHC’s case. WEX Inc (NYSE:WEX) is the most popular stock in this table. On the other hand WGP Group (NYSE:WGP) is the least popular one with only 7 bullish hedge fund positions. Encompass Health Corporation (NYSE:EHC) is not the most popular stock in this group but hedge fund interest is still above average. This is a slightly positive signal but we’d rather spend our time researching stocks that hedge funds are piling on. Our calculations showed that top 15 most popular stocks among hedge funds returned 21.3% through April 8th and outperformed the S&P 500 ETF (SPY) by more than 5 percentage points. Unfortunately EHC wasn’t in this group. Hedge funds that bet on EHC were disappointed as the stock lost 1.8% and underperformed the market. If you are interested in investing in large cap stocks, you should check out the top 15 hedge fund stocks as 12 of these outperformed the market.