Although the masses and most of the financial media blame hedge funds for their exorbitant fee structure and disappointing performance, these investors have proved to have great stock picking abilities over the years (that’s why their assets under management continue to swell). We believe hedge fund sentiment should serve as a crucial tool of an individual investor’s stock selection process, as it may offer great insights of how the brightest minds of the finance industry feel about specific stocks. After all, these people have access to smartest analysts and expensive data/information sources that individual investors can’t match. So should one consider investing in Echostar Corporation (NASDAQ:SATS)? The smart money sentiment can provide an answer to this question.

Echostar Corporation (NASDAQ:SATS) has seen an increase in hedge fund interest of late. Our calculations also showed that sats isn’t among the 30 most popular stocks among hedge funds.

What does the smart money think about Echostar Corporation (NASDAQ:SATS)? 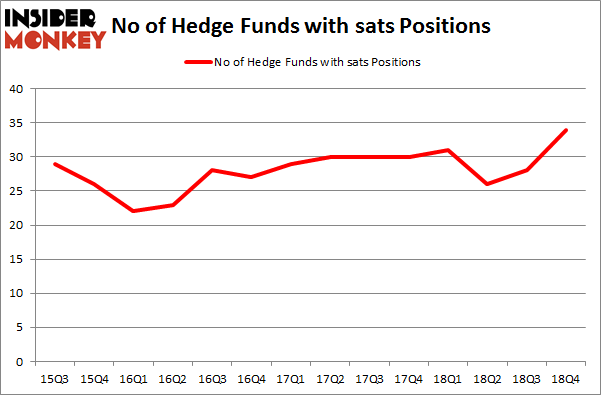 More specifically, Renaissance Technologies was the largest shareholder of Echostar Corporation (NASDAQ:SATS), with a stake worth $108.3 million reported as of the end of September. Trailing Renaissance Technologies was Mangrove Partners, which amassed a stake valued at $56.4 million. Park West Asset Management, Millennium Management, and Greenlight Capital were also very fond of the stock, giving the stock large weights in their portfolios.