Is Eastman Chemical Company (NYSE:EMN) a good equity to bet on right now? We like to check what the smart money thinks first before doing extensive research. Although there have been several high profile failed hedge fund picks, the consensus picks among hedge fund investors have historically outperformed the market after adjusting for known risk attributes. It’s not surprising given that hedge funds have access to better information and more resources to find the winners in the stock market.

Eastman Chemical Company (NYSE:EMN) investors should be aware of an increase in support from the world’s most elite money managers of late. EMN was in 33 hedge funds’ portfolios at the end of the fourth quarter of 2018. There were 25 hedge funds in our database with EMN positions at the end of the previous quarter. Our calculations also showed that EMN isn’t among the 30 most popular stocks among hedge funds.

At the moment there are a multitude of tools shareholders use to evaluate their stock investments. Two of the most under-the-radar tools are hedge fund and insider trading signals. Our researchers have shown that, historically, those who follow the top picks of the top fund managers can beat the broader indices by a significant margin (see the details here).

At the end of the fourth quarter, a total of 33 of the hedge funds tracked by Insider Monkey were long this stock, a change of 32% from one quarter earlier. On the other hand, there were a total of 28 hedge funds with a bullish position in EMN a year ago. With hedgies’ sentiment swirling, there exists an “upper tier” of notable hedge fund managers who were boosting their stakes substantially (or already accumulated large positions). 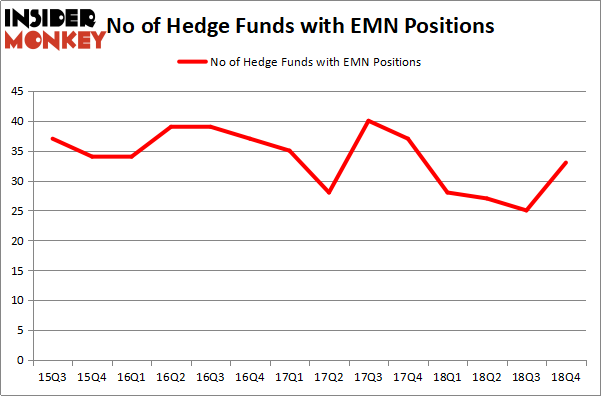 Of the funds tracked by Insider Monkey, Ric Dillon’s Diamond Hill Capital has the biggest position in Eastman Chemical Company (NYSE:EMN), worth close to $90.4 million, comprising 0.5% of its total 13F portfolio. Coming in second is Balyasny Asset Management, managed by Dmitry Balyasny, which holds a $48.4 million position; the fund has 0.3% of its 13F portfolio invested in the stock. Other professional money managers that are bullish include Ray Dalio’s Bridgewater Associates, Ken Griffin’s Citadel Investment Group and Cliff Asness’s AQR Capital Management.

Now, key money managers have been driving this bullishness. Balyasny Asset Management, managed by Dmitry Balyasny, initiated the most outsized position in Eastman Chemical Company (NYSE:EMN). Balyasny Asset Management had $48.4 million invested in the company at the end of the quarter. Ray Dalio’s Bridgewater Associates also made a $45.7 million investment in the stock during the quarter. The other funds with new positions in the stock are Ryan Caldwell’s Chiron Investment Management, John Overdeck and David Siegel’s Two Sigma Advisors, and Jonathan Barrett and Paul Segal’s Luminus Management.

As you can see these stocks had an average of 29.75 hedge funds with bullish positions and the average amount invested in these stocks was $493 million. That figure was $437 million in EMN’s case. Tractor Supply Company (NASDAQ:TSCO) is the most popular stock in this table. On the other hand Old Dominion Freight Line, Inc. (NASDAQ:ODFL) is the least popular one with only 20 bullish hedge fund positions. Eastman Chemical Company (NYSE:EMN) is not the most popular stock in this group but hedge fund interest is still above average. This is a slightly positive signal but we’d rather spend our time researching stocks that hedge funds are piling on. Our calculations showed that top 15 most popular stocks among hedge funds returned 19.7% through March 15th and outperformed the S&P 500 ETF (SPY) by 6.6 percentage points. Unfortunately EMN wasn’t in this group. Hedge funds that bet on EMN were disappointed as the stock returned 8.3% and underperformed the market. If you are interested in investing in large cap stocks, you should check out the top 15 hedge fund stocks as 13 of these outperformed the market.