East West Bancorp, Inc. (NASDAQ:EWBC) shareholders have witnessed a decrease in enthusiasm from smart money of late. Our calculations also showed that EWBC isn’t among the 30 most popular stocks among hedge funds.

If you’d ask most market participants, hedge funds are perceived as slow, outdated investment vehicles of yesteryear. While there are over 8000 funds trading at present, Our experts hone in on the leaders of this group, approximately 750 funds. Most estimates calculate that this group of people shepherd most of the smart money’s total capital, and by keeping an eye on their top picks, Insider Monkey has unearthed a few investment strategies that have historically outrun Mr. Market. Insider Monkey’s flagship hedge fund strategy outperformed the S&P 500 index by nearly 5 percentage points per year since its inception in May 2014 through early November 2018. We were able to generate large returns even by identifying short candidates. Our portfolio of short stocks lost 27.5% since February 2017 (through March 12th) even though the market was up nearly 25% during the same period. We just shared a list of 6 short targets in our latest quarterly update and they are already down an average of 6% in less than a month.

Heading into the first quarter of 2019, a total of 27 of the hedge funds tracked by Insider Monkey were long this stock, a change of -7% from the previous quarter. Below, you can check out the change in hedge fund sentiment towards EWBC over the last 14 quarters. So, let’s find out which hedge funds were among the top holders of the stock and which hedge funds were making big moves. 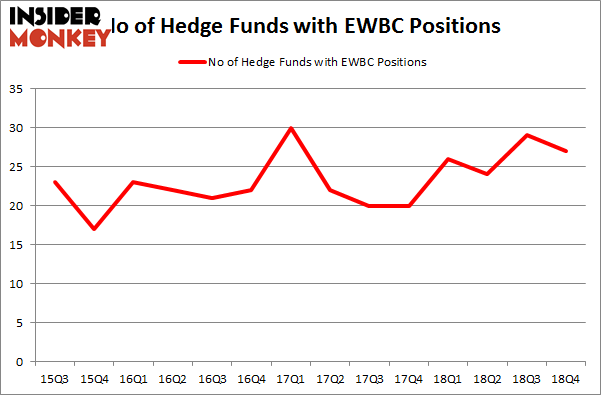 According to publicly available hedge fund and institutional investor holdings data compiled by Insider Monkey, Fisher Asset Management, managed by Ken Fisher, holds the most valuable position in East West Bancorp, Inc. (NASDAQ:EWBC). Fisher Asset Management has a $93.8 million position in the stock, comprising 0.1% of its 13F portfolio. On Fisher Asset Management’s heels is Israel Englander of Millennium Management, with a $54.7 million position; 0.1% of its 13F portfolio is allocated to the company. Other members of the smart money that are bullish include D. E. Shaw’s D E Shaw, John Overdeck and David Siegel’s Two Sigma Advisors and Ken Griffin’s Citadel Investment Group.

Judging by the fact that East West Bancorp, Inc. (NASDAQ:EWBC) has witnessed falling interest from hedge fund managers, it’s safe to say that there was a specific group of fund managers that slashed their full holdings heading into Q3. At the top of the heap, Glenn Russell Dubin’s Highbridge Capital Management dropped the largest investment of the “upper crust” of funds watched by Insider Monkey, worth close to $3 million in stock, and Joe DiMenna’s ZWEIG DIMENNA PARTNERS was right behind this move, as the fund dropped about $0.8 million worth. These moves are interesting, as aggregate hedge fund interest was cut by 2 funds heading into Q3.

As you can see these stocks had an average of 20.25 hedge funds with bullish positions and the average amount invested in these stocks was $292 million. That figure was $462 million in EWBC’s case. Gildan Activewear Inc (NYSE:GIL) is the most popular stock in this table. On the other hand Commerce Bancshares, Inc. (NASDAQ:CBSH) is the least popular one with only 11 bullish hedge fund positions. Compared to these stocks East West Bancorp, Inc. (NASDAQ:EWBC) is more popular among hedge funds. Considering that hedge funds are fond of this stock in relation to its market cap peers, it may be a good idea to analyze it in detail and potentially include it in your portfolio. Our calculations showed that top 15 most popular stocks among hedge funds returned 21.3% through April 8th and outperformed the S&P 500 ETF (SPY) by more than 5 percentage points. Hedge funds were also right about betting on EWBC, though not to the same extent, as the stock returned 18% and outperformed the market as well.