We at Insider Monkey have gone over 700 13F filings that hedge funds and prominent investors are required to file by the SEC. The 13F filings show the funds’ and investors’ portfolio positions as of December 31st. In this article we look at what those investors think of DHT Holdings Inc (NYSE:DHT).

DHT Holdings Inc (NYSE:DHT) was in 17 hedge funds’ portfolios at the end of December. DHT investors should pay attention to an increase in enthusiasm from smart money recently. There were 12 hedge funds in our database with DHT positions at the end of the previous quarter. Our calculations also showed that dht isn’t among the 30 most popular stocks among hedge funds.

Heading into the first quarter of 2019, a total of 17 of the hedge funds tracked by Insider Monkey were bullish on this stock, a change of 42% from the second quarter of 2018. The graph below displays the number of hedge funds with bullish position in DHT over the last 14 quarters. With hedgies’ capital changing hands, there exists an “upper tier” of key hedge fund managers who were upping their holdings meaningfully (or already accumulated large positions). 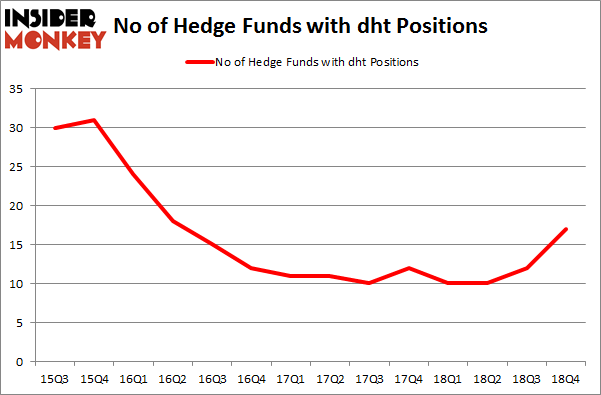 Among these funds, Renaissance Technologies held the most valuable stake in DHT Holdings Inc (NYSE:DHT), which was worth $19.5 million at the end of the fourth quarter. On the second spot was Lansdowne Partners which amassed $15.2 million worth of shares. Moreover, SAYA Management, Canyon Capital Advisors, and PEAK6 Capital Management were also bullish on DHT Holdings Inc (NYSE:DHT), allocating a large percentage of their portfolios to this stock.

With a general bullishness amongst the heavyweights, specific money managers were breaking ground themselves. SAYA Management, managed by Anand More, established the most valuable position in DHT Holdings Inc (NYSE:DHT). SAYA Management had $7.2 million invested in the company at the end of the quarter. Kenneth Tropin’s Graham Capital Management also initiated a $5.7 million position during the quarter. The other funds with new positions in the stock are Steve Cohen’s Point72 Asset Management, Till Bechtolsheimer’s Arosa Capital Management, and Paul Marshall and Ian Wace’s Marshall Wace LLP.

As you can see these stocks had an average of 12.75 hedge funds with bullish positions and the average amount invested in these stocks was $64 million. That figure was $65 million in DHT’s case. Weatherford International plc (NYSE:WFT) is the most popular stock in this table. On the other hand Camden National Corporation (NASDAQ:CAC) is the least popular one with only 6 bullish hedge fund positions. DHT Holdings Inc (NYSE:DHT) is not the most popular stock in this group but hedge fund interest is still above average. Our calculations showed that top 15 most popular stocks) among hedge funds returned 24.2% through April 22nd and outperformed the S&P 500 ETF (SPY) by more than 7 percentage points. Hedge funds were also right about betting on DHT as the stock returned 31.5% and outperformed the market by an even larger margin. Hedge funds were rewarded for their relative bullishness.