While the market driven by short-term sentiment influenced by the accomodative interest rate environment in the US, increasing oil prices and optimism towards the resolution of the trade war with China, many smart money investors kept their cautious approach regarding the current bull run in the first quarter and hedging or reducing many of their long positions. However, as we know, big investors usually buy stocks with strong fundamentals, which is why we believe we can profit from imitating them. In this article, we are going to take a look at the smart money sentiment surrounding CSX Corporation (NASDAQ:CSX).

Is CSX Corporation (NASDAQ:CSX) a splendid investment right now? Prominent investors are taking a pessimistic view. The number of long hedge fund positions went down by 6 lately. Our calculations also showed that CSX isn’t among the 30 most popular stocks among hedge funds.

At the end of the first quarter, a total of 44 of the hedge funds tracked by Insider Monkey were long this stock, a change of -12% from one quarter earlier. The graph below displays the number of hedge funds with bullish position in CSX over the last 15 quarters. With hedge funds’ positions undergoing their usual ebb and flow, there exists an “upper tier” of key hedge fund managers who were boosting their holdings meaningfully (or already accumulated large positions). 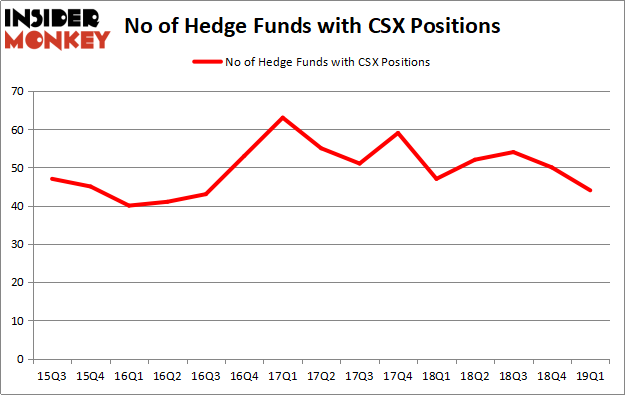 Among these funds, Mantle Ridge LP held the most valuable stake in CSX Corporation (NASDAQ:CSX), which was worth $2847.3 million at the end of the first quarter. On the second spot was Egerton Capital Limited which amassed $908.4 million worth of shares. Moreover, Lone Pine Capital, Steadfast Capital Management, and Millennium Management were also bullish on CSX Corporation (NASDAQ:CSX), allocating a large percentage of their portfolios to this stock.

Seeing as CSX Corporation (NASDAQ:CSX) has faced bearish sentiment from the entirety of the hedge funds we track, we can see that there is a sect of money managers that decided to sell off their positions entirely last quarter. Interestingly, Richard Chilton’s Chilton Investment Company dropped the largest stake of the 700 funds monitored by Insider Monkey, comprising close to $109 million in stock. Gregg Moskowitz’s fund, Interval Partners, also dropped its stock, about $35.7 million worth. These moves are interesting, as total hedge fund interest was cut by 6 funds last quarter.

As you can see these stocks had an average of 40.75 hedge funds with bullish positions and the average amount invested in these stocks was $1500 million. That figure was $5573 million in CSX’s case. Schlumberger Limited. (NYSE:SLB) is the most popular stock in this table. On the other hand Walgreens Boots Alliance Inc (NASDAQ:WBA) is the least popular one with only 33 bullish hedge fund positions. CSX Corporation (NASDAQ:CSX) is not the most popular stock in this group but hedge fund interest is still above average. Our calculations showed that top 20 most popular stocks among hedge funds returned 1.9% in Q2 through May 30th and outperformed the S&P 500 ETF (SPY) by more than 3 percentage points. Hedge funds were also right about betting on CSX, though not to the same extent, as the stock returned 0.6% during the same time frame and outperformed the market as well.