We are still in an overall bull market and many stocks that smart money investors were piling into surged through October 17th. Among them, Facebook and Microsoft ranked among the top 3 picks and these stocks gained 45% and 39% respectively. Hedge funds’ top 3 stock picks returned 34.4% this year and beat the S&P 500 ETFs by 13 percentage points. Investing in index funds guarantees you average returns, not superior returns. We are looking to generate superior returns for our readers. That’s why we believe it isn’t a waste of time to check out hedge fund sentiment before you invest in a stock like Costamare Inc (NYSE:CMRE).

Is Costamare Inc (NYSE:CMRE) a safe investment right now? The best stock pickers are in a bullish mood. The number of bullish hedge fund bets moved up by 1 recently. Our calculations also showed that CMRE isn’t among the 30 most popular stocks among hedge funds (see the video below).

Heading into the third quarter of 2019, a total of 10 of the hedge funds tracked by Insider Monkey were bullish on this stock, a change of 11% from the previous quarter. On the other hand, there were a total of 7 hedge funds with a bullish position in CMRE a year ago. With the smart money’s positions undergoing their usual ebb and flow, there exists a few notable hedge fund managers who were upping their stakes substantially (or already accumulated large positions). 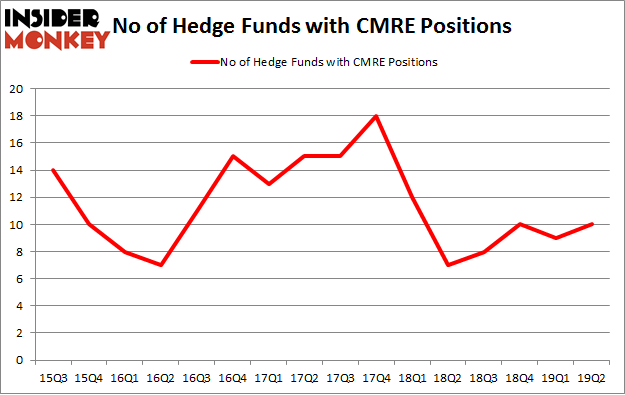 According to publicly available hedge fund and institutional investor holdings data compiled by Insider Monkey, Renaissance Technologies holds the number one position in Costamare Inc (NYSE:CMRE). Renaissance Technologies has a $11.8 million position in the stock, comprising less than 0.1%% of its 13F portfolio. Sitting at the No. 2 spot is Arrowstreet Capital, led by Peter Rathjens, Bruce Clarke and John Campbell, holding a $2.4 million position; the fund has less than 0.1%% of its 13F portfolio invested in the stock. Other professional money managers that are bullish comprise Murray Stahl’s Horizon Asset Management, Israel Englander’s Millennium Management and John Overdeck and David Siegel’s Two Sigma Advisors.

As industrywide interest jumped, key hedge funds were leading the bulls’ herd. Stevens Capital Management, managed by Matthew Tewksbury, established the most outsized position in Costamare Inc (NYSE:CMRE). Stevens Capital Management had $0.1 million invested in the company at the end of the quarter. Paul Marshall and Ian Wace’s Marshall Wace LLP also initiated a $0.1 million position during the quarter.

As you can see these stocks had an average of 8 hedge funds with bullish positions and the average amount invested in these stocks was $45 million. That figure was $18 million in CMRE’s case. Barrett Business Services, Inc. (NASDAQ:BBSI) is the most popular stock in this table. On the other hand Pzena Investment Management Inc (NYSE:PZN) is the least popular one with only 6 bullish hedge fund positions. Costamare Inc (NYSE:CMRE) is not the most popular stock in this group but hedge fund interest is still above average. Our calculations showed that top 20 most popular stocks among hedge funds returned 24.4% in 2019 through September 30th and outperformed the S&P 500 ETF (SPY) by 4 percentage points. Hedge funds were also right about betting on CMRE as the stock returned 20.4% during the third quarter and outperformed the market. Hedge funds were rewarded for their relative bullishness.

This Hedge Fund Can Still Deliver Double Digit Returns: Here Are Its Top Picks...
Monthly Newsletter Strategy
Download a free copy of our newsletter and see the details inside!
Hedge Fund Resource Center
Related News
Were Hedge Funds Right About Flocking Into Costamare Inc (CMRE) ? 32 Recent Stories to Keep You Informed About the Financial Markets Today Is Costamare Inc (CMRE) A Good Stock To Buy? Is It Safe To Hang On To Or Buy Greek Shippers Like Diana Shipping Inc. (DSX) And Tsakos Energy Navigation Ltd. (TNP) As Crisis Deepens? Hedge Fund News: Stephen Mandel, Louis Bacon & Starboard Value LP This Metric Says You Are Smart to Buy Scorpio Tankers Inc. (NYSE:STNG) Alexander & Baldwin Holdings Inc (MATX): Insiders Aren’t Crazy About It But Hedge Funds Love It 11 Largest Auto Insurance Companies In The US In 2019 10 Poorest Cities in America in 2019 8 Lowest Tar and Nicotine Cigarette Brands in 2019
Billionaire Hedge Funds