The 700+ hedge funds and money managers tracked by Insider Monkey have already compiled and submitted their 13F filings for the fourth quarter, which unveil their equity positions as of December 31. We went through these filings, fixed typos and other more significant errors and identified the changes in hedge fund positions. Our extensive review of these public filings is finally over, so this article is set to reveal the smart money sentiment towards Cooper Tire & Rubber Company (NYSE:CTB).

Cooper Tire & Rubber Company (NYSE:CTB) was in 17 hedge funds’ portfolios at the end of the fourth quarter of 2018. CTB shareholders have witnessed an increase in support from the world’s most elite money managers lately. There were 10 hedge funds in our database with CTB holdings at the end of the previous quarter. Our calculations also showed that ctb isn’t among the 30 most popular stocks among hedge funds.

What does the smart money think about Cooper Tire & Rubber Company (NYSE:CTB)?

At the end of the fourth quarter, a total of 17 of the hedge funds tracked by Insider Monkey held long positions in this stock, a change of 70% from the second quarter of 2018. The graph below displays the number of hedge funds with bullish position in CTB over the last 14 quarters. So, let’s review which hedge funds were among the top holders of the stock and which hedge funds were making big moves. 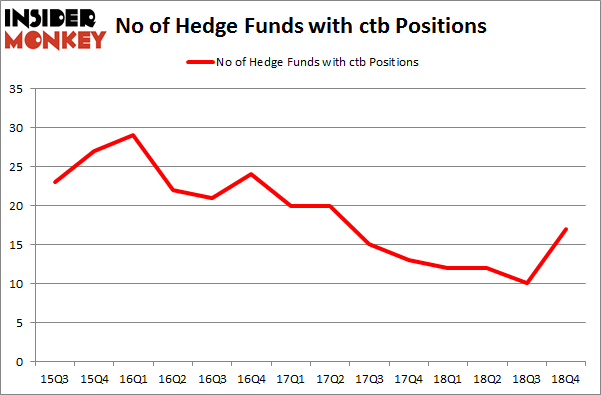 According to Insider Monkey’s hedge fund database, Royce & Associates, managed by Chuck Royce, holds the largest position in Cooper Tire & Rubber Company (NYSE:CTB). Royce & Associates has a $73.3 million position in the stock, comprising 0.7% of its 13F portfolio. Coming in second is Ken Grossman and Glen Schneider of SG Capital Management, with a $16.9 million position; the fund has 5.1% of its 13F portfolio invested in the stock. Other members of the smart money with similar optimism contain Peter Schliemann’s Rutabaga Capital Management, Steve Cohen’s Point72 Asset Management and Mario Gabelli’s GAMCO Investors.

As you can see these stocks had an average of 12.5 hedge funds with bullish positions and the average amount invested in these stocks was $99 million. That figure was $141 million in CTB’s case. CNOOC Limited (NYSE:CEO) is the most popular stock in this table. On the other hand Provident Financial Services, Inc. (NYSE:PFS) is the least popular one with only 8 bullish hedge fund positions. Compared to these stocks Cooper Tire & Rubber Company (NYSE:CTB) is more popular among hedge funds. Our calculations showed that top 15 most popular stocks) among hedge funds returned 24.2% through April 22nd and outperformed the S&P 500 ETF (SPY) by more than 7 percentage points. Unfortunately CTB wasn’t nearly as popular as these 15 stock and hedge funds that were betting on CTB were disappointed as the stock returned 0.1% and underperformed the market. If you are interested in investing in large cap stocks with huge upside potential, you should check out the top 15 most popular stocks) among hedge funds as 13 of these stocks already outperformed the market this year.