Is Conduent Incorporated (NYSE:CNDT) a good equity to bet on right now? We like to check what the smart money thinks first before doing extensive research. Although there have been several high profile failed hedge fund picks, the consensus picks among hedge fund investors have historically outperformed the market after adjusting for known risk attributes. It’s not surprising given that hedge funds have access to better information and more resources to find the winners in the stock market.

Is Conduent Incorporated (NYSE:CNDT) a good investment today? The smart money is getting more bullish. The number of long hedge fund bets rose by 1 recently. Our calculations also showed that CNDT isn’t among the 30 most popular stocks among hedge funds. CNDT was in 35 hedge funds’ portfolios at the end of the fourth quarter of 2018. There were 34 hedge funds in our database with CNDT positions at the end of the previous quarter.

How have hedgies been trading Conduent Incorporated (NYSE:CNDT)? 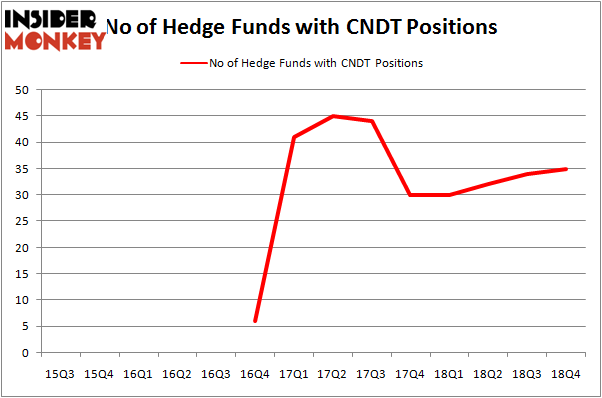 More specifically, Icahn Capital LP was the largest shareholder of Conduent Incorporated (NYSE:CNDT), with a stake worth $210.5 million reported as of the end of September. Trailing Icahn Capital LP was Iridian Asset Management, which amassed a stake valued at $66.5 million. Renaissance Technologies, AQR Capital Management, and Glenview Capital were also very fond of the stock, giving the stock large weights in their portfolios.

As one would reasonably expect, specific money managers have been driving this bullishness. Clearline Capital, managed by Marc Majzner, initiated the most valuable position in Conduent Incorporated (NYSE:CNDT). Clearline Capital had $5.4 million invested in the company at the end of the quarter. Paul Marshall and Ian Wace’s Marshall Wace LLP also made a $3.9 million investment in the stock during the quarter. The other funds with new positions in the stock are William C. Martin’s Raging Capital Management, Israel Englander’s Millennium Management, and Minhua Zhang’s Weld Capital Management.

As you can see these stocks had an average of 20 hedge funds with bullish positions and the average amount invested in these stocks was $208 million. That figure was $488 million in CNDT’s case. Liberty Expedia Holdings, Inc. (NASDAQ:LEXEA) is the most popular stock in this table. On the other hand Sunoco LP (NYSE:SUN) is the least popular one with only 7 bullish hedge fund positions. Compared to these stocks Conduent Incorporated (NYSE:CNDT) is more popular among hedge funds. Our calculations showed that top 15 most popular stocks) among hedge funds returned 24.2% through April 22nd and outperformed the S&P 500 ETF (SPY) by more than 7 percentage points. Hedge funds were also right about betting on CNDT, though not to the same extent, as the stock returned 22.2% and outperformed the market as well.