A whopping number of 13F filings filed with U.S. Securities and Exchange Commission has been processed by Insider Monkey so that individual investors can look at the overall hedge fund sentiment towards the stocks included in their watchlists. These freshly-submitted public filings disclose money managers’ equity positions as of the end of the three-month period that ended December 31, so let’s proceed with the discussion of the hedge fund sentiment on Columbia Property Trust Inc (NYSE:CXP).

Hedge fund interest in Columbia Property Trust Inc (NYSE:CXP) shares was flat at the end of last quarter. This is usually a negative indicator. At the end of this article we will also compare CXP to other stocks including Brady Corp (NYSE:BRC), Argo Group International Holdings, Ltd. (NYSE:ARGO), and International Bancshares Corp (NASDAQ:IBOC) to get a better sense of its popularity.

What does the smart money think about Columbia Property Trust Inc (NYSE:CXP)?

At the end of the fourth quarter, a total of 13 of the hedge funds tracked by Insider Monkey were bullish on this stock, a change of 0% from one quarter earlier. On the other hand, there were a total of 11 hedge funds with a bullish position in CXP a year ago. With hedge funds’ capital changing hands, there exists a select group of notable hedge fund managers who were adding to their holdings considerably (or already accumulated large positions). 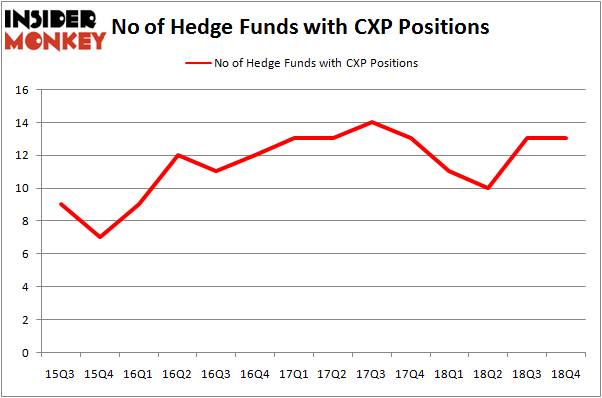 More specifically, Millennium Management was the largest shareholder of Columbia Property Trust Inc (NYSE:CXP), with a stake worth $19.7 million reported as of the end of September. Trailing Millennium Management was Renaissance Technologies, which amassed a stake valued at $11.8 million. Waterfront Capital Partners, Balyasny Asset Management, and D E Shaw were also very fond of the stock, giving the stock large weights in their portfolios.

Judging by the fact that Columbia Property Trust Inc (NYSE:CXP) has faced a decline in interest from hedge fund managers, we can see that there exists a select few hedge funds that decided to sell off their positions entirely by the end of the third quarter. Intriguingly, John Khoury’s Long Pond Capital dumped the largest position of the “upper crust” of funds followed by Insider Monkey, comprising close to $55.7 million in stock. Jeffrey Pierce’s fund, Snow Park Capital Partners, also dropped its stock, about $6.3 million worth. These transactions are interesting, as total hedge fund interest stayed the same (this is a bearish signal in our experience).

As you can see these stocks had an average of 20.25 hedge funds with bullish positions and the average amount invested in these stocks was $229 million. That figure was $57 million in CXP’s case. Navient Corp (NASDAQ:NAVI) is the most popular stock in this table. On the other hand Argo Group International Holdings, Ltd. (NYSE:ARGO) is the least popular one with only 13 bullish hedge fund positions. Compared to these stocks Columbia Property Trust Inc (NYSE:CXP) is even less popular than ARGO. Hedge funds dodged a bullet by taking a bearish stance towards CXP. Our calculations showed that the top 15 most popular hedge fund stocks returned 24.2% through April 22nd and outperformed the S&P 500 ETF (SPY) by more than 7 percentage points. Unfortunately CXP wasn’t nearly as popular as these 15 stock (hedge fund sentiment was very bearish); CXP investors were disappointed as the stock returned 15% and underperformed the market. If you are interested in investing in large cap stocks with huge upside potential, you should check out the top 15 most popular stocks) among hedge funds as 13 of these stocks already outperformed the market this year.