The government requires hedge funds and wealthy investors that crossed the $100 million equity holdings threshold are required to file a report that shows their positions at the end of every quarter. Even though it isn’t the intention, these filings level the playing field for ordinary investors. The latest round of 13F filings disclosed the funds’ positions on December 31. We at Insider Monkey have made an extensive database of nearly 750 of those elite funds and prominent investors’ filings. In this article, we analyze how these elite funds and prominent investors traded Colony Credit Real Estate, Inc. (NYSE:CLNC) based on those filings.

Colony Credit Real Estate, Inc. (NYSE:CLNC) investors should pay attention to an increase in hedge fund sentiment recently. CLNC was in 7 hedge funds’ portfolios at the end of the fourth quarter of 2018. There were 4 hedge funds in our database with CLNC positions at the end of the previous quarter. Our calculations also showed that CLNC isn’t among the 30 most popular stocks among hedge funds.

In today’s marketplace there are many methods stock market investors use to appraise their holdings. Some of the most under-the-radar methods are hedge fund and insider trading activity. Our researchers have shown that, historically, those who follow the top picks of the top investment managers can outclass the market by a significant margin (see the details here).

What have hedge funds been doing with Colony Credit Real Estate, Inc. (NYSE:CLNC)? 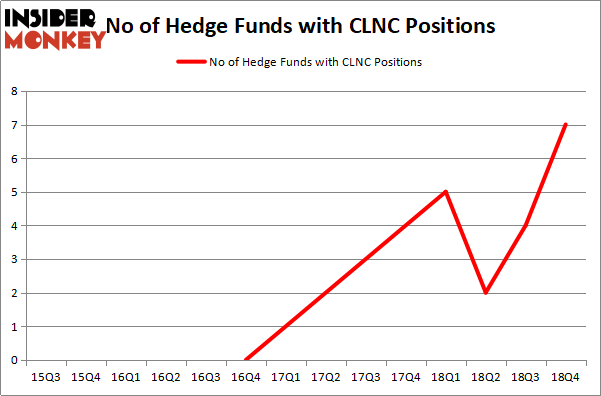 The largest stake in Colony Credit Real Estate, Inc. (NYSE:CLNC) was held by HBK Investments, which reported holding $9.3 million worth of stock at the end of December. It was followed by Balyasny Asset Management with a $7.9 million position. Other investors bullish on the company included Holocene Advisors, AQR Capital Management, and Highland Capital Management.

As aggregate interest increased, some big names have been driving this bullishness. HBK Investments, managed by David Costen Haley, initiated the most outsized position in Colony Credit Real Estate, Inc. (NYSE:CLNC). HBK Investments had $9.3 million invested in the company at the end of the quarter. Dmitry Balyasny’s Balyasny Asset Management also made a $7.9 million investment in the stock during the quarter. The other funds with new positions in the stock are Brandon Haley’s Holocene Advisors, Cliff Asness’s AQR Capital Management, and Paul Tudor Jones’s Tudor Investment Corp.

As you can see these stocks had an average of 13.25 hedge funds with bullish positions and the average amount invested in these stocks was $145 million. That figure was $20 million in CLNC’s case. CenterState Bank Corporation (NASDAQ:CSFL) is the most popular stock in this table. On the other hand Brookfield Business Partners L.P. (NYSE:BBU) is the least popular one with only 4 bullish hedge fund positions. Colony Credit Real Estate, Inc. (NYSE:CLNC) is not the least popular stock in this group but hedge fund interest is still below average. This is a slightly negative signal and we’d rather spend our time researching stocks that hedge funds are piling on. Our calculations showed that top 15 most popular stocks) among hedge funds returned 24.2% through April 22nd and outperformed the S&P 500 ETF (SPY) by more than 7 percentage points. Unfortunately CLNC wasn’t nearly as popular as these 15 stock (hedge fund sentiment was quite bearish); CLNC investors were disappointed as the stock returned -0.1% and underperformed the market. If you are interested in investing in large cap stocks with huge upside potential, you should check out the top 15 most popular stocks) among hedge funds as 13 of these stocks already outperformed the market this year.