Colfax Corporation (NYSE:CFX) was in 27 hedge funds’ portfolios at the end of the second quarter of 2019. CFX investors should be aware of a decrease in enthusiasm from smart money lately. There were 32 hedge funds in our database with CFX holdings at the end of the previous quarter. Our calculations also showed that CFX isn’t among the 30 most popular stocks among hedge funds (view the video below).

What does smart money think about Colfax Corporation (NYSE:CFX)?

At the end of the second quarter, a total of 27 of the hedge funds tracked by Insider Monkey held long positions in this stock, a change of -16% from one quarter earlier. The graph below displays the number of hedge funds with bullish position in CFX over the last 16 quarters. With hedge funds’ capital changing hands, there exists a few noteworthy hedge fund managers who were adding to their holdings meaningfully (or already accumulated large positions). 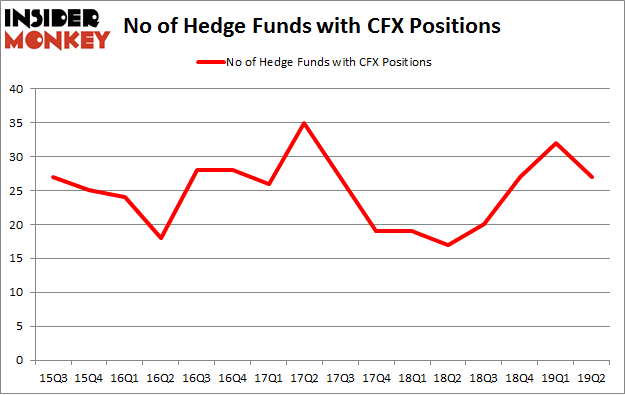 When looking at the institutional investors followed by Insider Monkey, Diamond Hill Capital, managed by Ric Dillon, holds the biggest position in Colfax Corporation (NYSE:CFX). Diamond Hill Capital has a $76.8 million position in the stock, comprising 0.4% of its 13F portfolio. The second most bullish fund manager is Cardinal Capital, managed by Amy Minella, which holds a $70.1 million position; the fund has 2.3% of its 13F portfolio invested in the stock. Some other hedge funds and institutional investors with similar optimism include Chuck Royce’s Royce & Associates, Dan Loeb’s Third Point and Charles Davidson and Joseph Jacobs’s Wexford Capital.

Because Colfax Corporation (NYSE:CFX) has faced declining sentiment from the entirety of the hedge funds we track, logic holds that there lies a certain “tier” of hedgies that decided to sell off their entire stakes heading into Q3. It’s worth mentioning that Robert Joseph Caruso’s Select Equity Group dropped the largest investment of the “upper crust” of funds followed by Insider Monkey, valued at about $76.2 million in stock. David Rosen’s fund, Rubric Capital Management, also cut its stock, about $30.1 million worth. These transactions are important to note, as total hedge fund interest dropped by 5 funds heading into Q3.

As you can see these stocks had an average of 18.5 hedge funds with bullish positions and the average amount invested in these stocks was $187 million. That figure was $552 million in CFX’s case. Stitch Fix, Inc. (NASDAQ:SFIX) is the most popular stock in this table. On the other hand Balchem Corporation (NASDAQ:BCPC) is the least popular one with only 9 bullish hedge fund positions. Colfax Corporation (NYSE:CFX) is not the most popular stock in this group but hedge fund interest is still above average. Our calculations showed that top 20 most popular stocks among hedge funds returned 24.4% in 2019 through September 30th and outperformed the S&P 500 ETF (SPY) by 4 percentage points. Hedge funds were also right about betting on CFX, though not to the same extent, as the stock returned 3.7% during the third quarter and outperformed the market as well.