How do you pick the next stock to invest in? One way would be to spend hours of research browsing through thousands of publicly traded companies. However, an easier way is to look at the stocks that smart money investors are collectively bullish on. Hedge funds and other institutional investors usually invest large amounts of capital and have to conduct due diligence while choosing their next pick. They don’t always get it right, but, on average, their stock picks historically generated strong returns after adjusting for known risk factors. With this in mind, let’s take a look at the recent hedge fund activity surrounding Cincinnati Financial Corporation (NASDAQ:CINF).

Is Cincinnati Financial Corporation (NASDAQ:CINF) worth your attention right now? Investors who are in the know are in a pessimistic mood. The number of bullish hedge fund positions were cut by 1 lately. Our calculations also showed that CINF isn’t among the 30 most popular stocks among hedge funds. CINF was in 21 hedge funds’ portfolios at the end of the first quarter of 2019. There were 22 hedge funds in our database with CINF holdings at the end of the previous quarter.

To the average investor there are numerous formulas stock market investors use to size up publicly traded companies. A pair of the most under-the-radar formulas are hedge fund and insider trading moves. Our experts have shown that, historically, those who follow the best picks of the best money managers can outclass the market by a solid amount (see the details here).

What have hedge funds been doing with Cincinnati Financial Corporation (NASDAQ:CINF)? 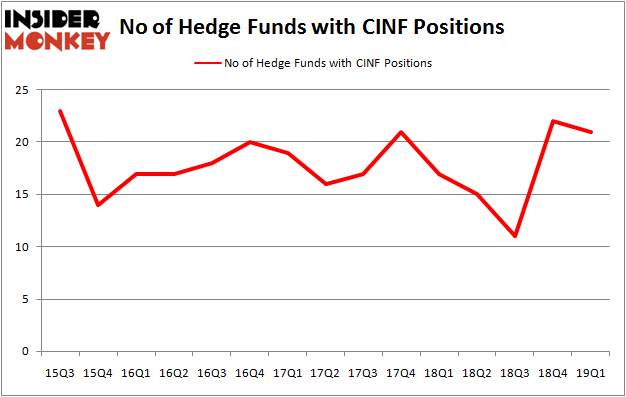 Of the funds tracked by Insider Monkey, Select Equity Group, managed by Robert Joseph Caruso, holds the most valuable position in Cincinnati Financial Corporation (NASDAQ:CINF). Select Equity Group has a $470.1 million position in the stock, comprising 3.2% of its 13F portfolio. Coming in second is Renaissance Technologies, managed by Jim Simons, which holds a $16.1 million position; the fund has less than 0.1%% of its 13F portfolio invested in the stock. Some other hedge funds and institutional investors that hold long positions consist of Noam Gottesman’s GLG Partners, Frederick DiSanto’s Ancora Advisors and Ken Fisher’s Fisher Asset Management.

Due to the fact that Cincinnati Financial Corporation (NASDAQ:CINF) has witnessed bearish sentiment from the smart money, it’s safe to say that there lies a certain “tier” of hedgies that elected to cut their entire stakes in the third quarter. Intriguingly, John Brandmeyer’s Cognios Capital dropped the largest stake of all the hedgies followed by Insider Monkey, totaling close to $2 million in stock, and Ray Dalio’s Bridgewater Associates was right behind this move, as the fund said goodbye to about $1.1 million worth. These moves are important to note, as total hedge fund interest dropped by 1 funds in the third quarter.

As you can see these stocks had an average of 24 hedge funds with bullish positions and the average amount invested in these stocks was $341 million. That figure was $546 million in CINF’s case. Western Digital Corporation (NASDAQ:WDC) is the most popular stock in this table. On the other hand Principal Financial Group Inc (NASDAQ:PFG) is the least popular one with only 15 bullish hedge fund positions. Cincinnati Financial Corporation (NASDAQ:CINF) is not the least popular stock in this group but hedge fund interest is still below average. Our calculations showed that top 20 most popular stocks among hedge funds returned 1.9% in Q2 through May 30th and outperformed the S&P 500 ETF (SPY) by more than 3 percentage points. A small number of hedge funds were also right about betting on CINF as the stock returned 14.5% during the same time frame and outperformed the market by an even larger margin.