After several tireless days we have finished crunching the numbers from nearly 750 13F filings issued by the elite hedge funds and other investment firms that we track at Insider Monkey, which disclosed those firms’ equity portfolios as of December 31. The results of that effort will be put on display in this article, as we share valuable insight into the smart money sentiment towards Churchill Downs Incorporated (NASDAQ:CHDN).

Hedge fund interest in Churchill Downs Incorporated (NASDAQ:CHDN) shares was flat at the end of last quarter. This is usually a negative indicator. At the end of this article we will also compare CHDN to other stocks including Eastgroup Properties Inc (NYSE:EGP), Schneider National, Inc. (NYSE:SNDR), and Taro Pharmaceutical Industries Ltd. (NYSE:TARO) to get a better sense of its popularity.

What does the smart money think about Churchill Downs Incorporated (NASDAQ:CHDN)?

At Q4’s end, a total of 26 of the hedge funds tracked by Insider Monkey held long positions in this stock, a change of 0% from the second quarter of 2018. By comparison, 19 hedge funds held shares or bullish call options in CHDN a year ago. With hedge funds’ positions undergoing their usual ebb and flow, there exists a select group of noteworthy hedge fund managers who were adding to their stakes meaningfully (or already accumulated large positions). 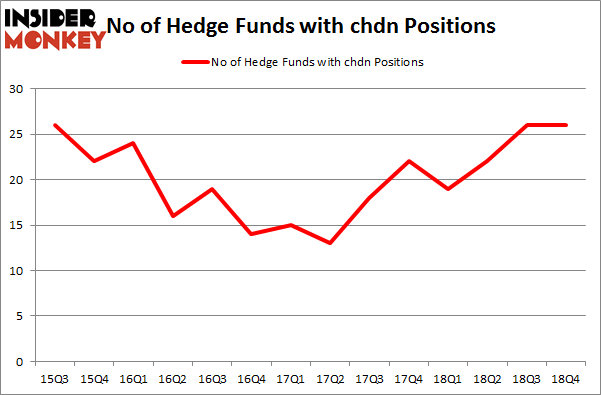 Among these funds, PAR Capital Management held the most valuable stake in Churchill Downs Incorporated (NASDAQ:CHDN), which was worth $166.1 million at the end of the third quarter. On the second spot was Balyasny Asset Management which amassed $66.7 million worth of shares. Moreover, Citadel Investment Group, GAMCO Investors, and Hudson Way Capital Management were also bullish on Churchill Downs Incorporated (NASDAQ:CHDN), allocating a large percentage of their portfolios to this stock.

Judging by the fact that Churchill Downs Incorporated (NASDAQ:CHDN) has experienced declining sentiment from the smart money, logic holds that there is a sect of fund managers that decided to sell off their full holdings in the third quarter. Interestingly, Israel Englander’s Millennium Management sold off the biggest investment of the “upper crust” of funds watched by Insider Monkey, worth close to $2.5 million in stock, and Joel Greenblatt’s Gotham Asset Management was right behind this move, as the fund dumped about $2.2 million worth. These bearish behaviors are intriguing to say the least, as total hedge fund interest stayed the same (this is a bearish signal in our experience).