Concerns over rising interest rates and expected further rate increases have hit several stocks hard during the fourth quarter. NASDAQ and Russell 2000 indices were already in correction territory. More importantly, Russell 2000 ETF (IWM) underperformed the larger S&P 500 ETF (SPY) by nearly 7 percentage points in the fourth quarter. Hedge funds and institutional investors tracked by Insider Monkey usually invest a disproportionate amount of their portfolios in smaller cap stocks. We have been receiving indications that hedge funds were paring back their overall exposure and this is one of the factors behind the recent movements in major indices. In this article, we will take a closer look at hedge fund sentiment towards Chico’s FAS, Inc. (NYSE:CHS).

Is Chico’s FAS, Inc. (NYSE:CHS) a healthy stock for your portfolio? Money managers are getting less optimistic. The number of bullish hedge fund bets shrunk by 4 lately. Our calculations also showed that CHS isn’t among the 30 most popular stocks among hedge funds. 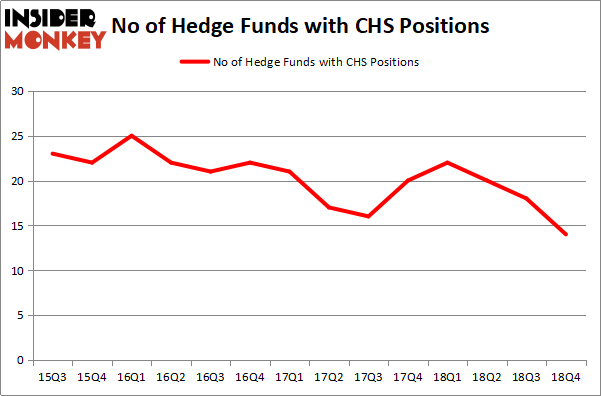 According to Insider Monkey’s hedge fund database, Jim Simons’s Renaissance Technologies has the biggest position in Chico’s FAS, Inc. (NYSE:CHS), worth close to $37.2 million, corresponding to less than 0.1%% of its total 13F portfolio. The second most bullish fund manager is Cliff Asness of AQR Capital Management, with a $9.3 million position; the fund has less than 0.1%% of its 13F portfolio invested in the stock. Other peers that are bullish contain Peter Rathjens, Bruce Clarke and John Campbell’s Arrowstreet Capital, and John Overdeck and David Siegel’s Two Sigma Advisors.

Because Chico’s FAS, Inc. (NYSE:CHS) has witnessed falling interest from the aggregate hedge fund industry, logic holds that there were a few funds that decided to sell off their full holdings heading into Q3. At the top of the heap, Ken Griffin’s Citadel Investment Group sold off the biggest position of the 700 funds tracked by Insider Monkey, valued at close to $1.3 million in stock. David Costen Haley’s fund, HBK Investments, also dumped its stock, about $1.2 million worth. These bearish behaviors are interesting, as aggregate hedge fund interest was cut by 4 funds heading into Q3.

As you can see these stocks had an average of 13.75 hedge funds with bullish positions and the average amount invested in these stocks was $57 million. That figure was $66 million in CHS’s case. Columbus McKinnon Corporation (NASDAQ:CMCO) is the most popular stock in this table. On the other hand Allegiance Bancshares, Inc. (NASDAQ:ABTX) is the least popular one with only 6 bullish hedge fund positions. Chico’s FAS, Inc. (NYSE:CHS) is not the most popular stock in this group but hedge fund interest is still above average. This is a slightly positive signal but we’d rather spend our time researching stocks that hedge funds are piling on. Our calculations showed that top 15 most popular stocks) among hedge funds returned 24.2% through April 22nd and outperformed the S&P 500 ETF (SPY) by more than 7 percentage points. Unfortunately CHS wasn’t nearly as popular as these 15 stock and hedge funds that were betting on CHS were disappointed as the stock returned -36.4% and underperformed the market. If you are interested in investing in large cap stocks with huge upside potential, you should check out the top 15 most popular stocks) among hedge funds as 13 of these stocks already outperformed the market this year.

Is Mesa Laboratories, Inc. (MLAB) A Good Stock To Buy?
Monthly Newsletter Strategy
Download a free copy of our newsletter and see the details inside!
Hedge Fund Resource Center
Related News
Is Chico’s FAS, Inc. (CHS) A Good Stock To Buy? Check Out These 34 Stories To Find Out What’s Happening In The Financial Markets Today Hedge Funds Are Souring On Chico’s FAS, Inc. (CHS) Why Tesla, PTC Therapeutics, Freeport-McMoRan, and Two More Are in the Spotlight Big Investment in Avon Products, Inc. (AVP) and Four Other Picks Send Barington Capital’s Returns Through the Roof Amazon.com, Inc. (AMZN) and Alphabet Inc (GOOGL) Among Stocks in Spotlight on Wednesday Why Shares of Chico’s FAS, Inc. (CHS) Are Down on Thursday 18 Cute Tinder Bio Examples (Female) 20 Clever Bumble Bios for Guys 15 Most Physically Demanding Olympic Sports
Billionaire Hedge Funds