Chemed Corporation (NYSE:CHE) shareholders have witnessed an increase in activity from the world’s largest hedge funds lately. CHE was in 24 hedge funds’ portfolios at the end of December. There were 23 hedge funds in our database with CHE holdings at the end of the previous quarter. Our calculations also showed that CHE isn’t among the 30 most popular stocks among hedge funds.

If you’d ask most market participants, hedge funds are seen as worthless, old investment tools of years past. While there are more than 8000 funds in operation at present, Our researchers hone in on the bigwigs of this club, approximately 750 funds. These investment experts manage the majority of the smart money’s total capital, and by shadowing their matchless stock picks, Insider Monkey has found a few investment strategies that have historically defeated the S&P 500 index. Insider Monkey’s flagship hedge fund strategy outperformed the S&P 500 index by nearly 5 percentage points per year since its inception in May 2014 through early November 2018. We were able to generate large returns even by identifying short candidates. Our portfolio of short stocks lost 27.5% since February 2017 (through March 12th) even though the market was up nearly 25% during the same period. We just shared a list of 6 short targets in our latest quarterly update and they are already down an average of 6% in less than a month. 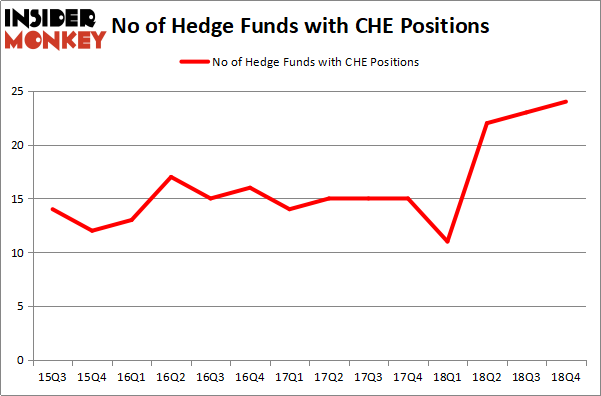 As one would reasonably expect, some big names were breaking ground themselves. Marshall Wace LLP, managed by Paul Marshall and Ian Wace, established the most outsized position in Chemed Corporation (NYSE:CHE). Marshall Wace LLP had $3.7 million invested in the company at the end of the quarter. Ronald Hua’s Qtron Investments also initiated a $0.3 million position during the quarter. The only other fund with a new position in the stock is Andre F. Perold’s HighVista Strategies.