“Value has performed relatively poorly since the 2017 shift, but we believe challenges to the S&P 500’s dominance are mounting and resulting active opportunities away from the index are growing. At some point, this fault line will break, likely on the back of rising rates, and all investors will be reminded that the best time to diversify away from the winners is when it is most painful. The bargain of capturing long-term value may be short-term pain, but enough is eventually enough and it comes time to harvest the benefits.,” said Clearbridge Investments in its market commentary. We aren’t sure whether long-term interest rates will top 5% and value stocks outperform growth, but we follow hedge fund investor letters to understand where the markets and stocks might be going. That’s why we believe it would be worthwhile to take a look at the hedge fund sentiment on CEVA, Inc. (NASDAQ:CEVA) in order to identify whether reputable and successful top money managers continue to believe in its potential.

CEVA, Inc. (NASDAQ:CEVA) was in 10 hedge funds’ portfolios at the end of December. CEVA investors should be aware of an increase in hedge fund sentiment recently. There were 7 hedge funds in our database with CEVA positions at the end of the previous quarter. Our calculations also showed that ceva isn’t among the 30 most popular stocks among hedge funds.

If you’d ask most investors, hedge funds are viewed as unimportant, outdated financial tools of years past. While there are over 8000 funds trading at present, Our experts hone in on the aristocrats of this club, around 750 funds. These investment experts control most of the smart money’s total asset base, and by tailing their inimitable picks, Insider Monkey has brought to light various investment strategies that have historically outrun the market. Insider Monkey’s flagship hedge fund strategy exceeded the S&P 500 index by nearly 5 percentage points a year since its inception in May 2014 through early November 2018. We were able to generate large returns even by identifying short candidates. Our portfolio of short stocks lost 27.5% since February 2017 (through March 12th) even though the market was up nearly 25% during the same period. We just shared a list of 6 short targets in our latest quarterly update and they are already down an average of 6% in less than a month.

How have hedgies been trading CEVA, Inc. (NASDAQ:CEVA)?

At the end of the fourth quarter, a total of 10 of the hedge funds tracked by Insider Monkey were bullish on this stock, a change of 43% from the previous quarter. By comparison, 8 hedge funds held shares or bullish call options in CEVA a year ago. With hedge funds’ positions undergoing their usual ebb and flow, there exists a few notable hedge fund managers who were adding to their stakes substantially (or already accumulated large positions). 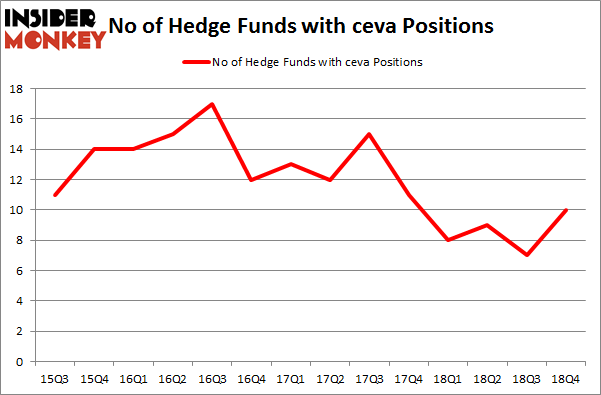 Among these funds, Rima Senvest Management held the most valuable stake in CEVA, Inc. (NASDAQ:CEVA), which was worth $11.1 million at the end of the fourth quarter. On the second spot was Millennium Management which amassed $2.6 million worth of shares. Moreover, D E Shaw, Two Sigma Advisors, and Renaissance Technologies were also bullish on CEVA, Inc. (NASDAQ:CEVA), allocating a large percentage of their portfolios to this stock.

Consequently, specific money managers have been driving this bullishness. Renaissance Technologies, managed by Jim Simons, initiated the most outsized position in CEVA, Inc. (NASDAQ:CEVA). Renaissance Technologies had $1.8 million invested in the company at the end of the quarter. Peter Muller’s PDT Partners also made a $0.4 million investment in the stock during the quarter. The only other fund with a new position in the stock is Minhua Zhang’s Weld Capital Management.

As you can see these stocks had an average of 7.75 hedge funds with bullish positions and the average amount invested in these stocks was $45 million. That figure was $23 million in CEVA’s case. Griffon Corporation (NYSE:GFF) is the most popular stock in this table. On the other hand Navios Maritime Containers L.P. (NASDAQ:NMCI) is the least popular one with only 4 bullish hedge fund positions. CEVA, Inc. (NASDAQ:CEVA) is not the most popular stock in this group but hedge fund interest is still above average. This is a slightly positive signal but we’d rather spend our time researching stocks that hedge funds are piling on. Our calculations showed that top 15 most popular stocks) among hedge funds returned 24.2% through April 22nd and outperformed the S&P 500 ETF (SPY) by more than 7 percentage points. Unfortunately CEVA wasn’t nearly as popular as these 15 stock and hedge funds that were betting on CEVA were disappointed as the stock returned 7.7% and underperformed the market. If you are interested in investing in large cap stocks with huge upside potential, you should check out the top 15 most popular stocks) among hedge funds as 13 of these stocks already outperformed the market this year.