CenturyLink, Inc. (NYSE:CTL) investors should pay attention to a decrease in activity from the world’s largest hedge funds of late. CTL was in 27 hedge funds’ portfolios at the end of the second quarter of 2019. There were 32 hedge funds in our database with CTL holdings at the end of the previous quarter. Our calculations also showed that CTL isn’t among the 30 most popular stocks among hedge funds (view the video below). 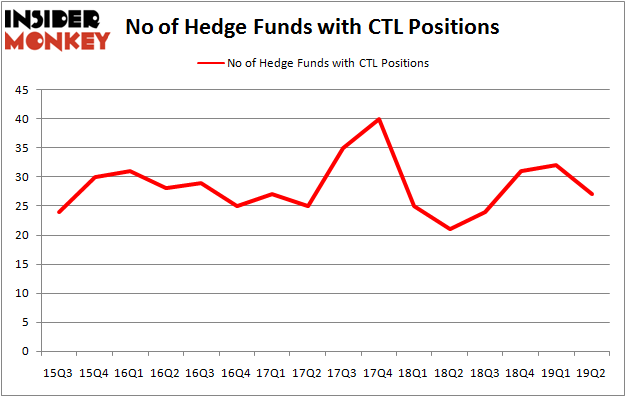 Unlike some fund managers who are betting on Dow reaching 40000 in a year, our long-short investment strategy doesn’t rely on bull markets to deliver double digit returns. We only rely on hedge fund buy/sell signals. Let’s take a look at the recent hedge fund action regarding CenturyLink, Inc. (NYSE:CTL).

At the end of the second quarter, a total of 27 of the hedge funds tracked by Insider Monkey held long positions in this stock, a change of -16% from the first quarter of 2019. Below, you can check out the change in hedge fund sentiment towards CTL over the last 16 quarters. With hedge funds’ positions undergoing their usual ebb and flow, there exists an “upper tier” of notable hedge fund managers who were boosting their stakes significantly (or already accumulated large positions).

Among these funds, Southeastern Asset Management held the most valuable stake in CenturyLink, Inc. (NYSE:CTL), which was worth $880.9 million at the end of the second quarter. On the second spot was Fairfax Financial Holdings which amassed $27.7 million worth of shares. Moreover, Citadel Investment Group, Gotham Asset Management, and PEAK6 Capital Management were also bullish on CenturyLink, Inc. (NYSE:CTL), allocating a large percentage of their portfolios to this stock.

Due to the fact that CenturyLink, Inc. (NYSE:CTL) has witnessed falling interest from the entirety of the hedge funds we track, it’s safe to say that there is a sect of fund managers that elected to cut their entire stakes heading into Q3. Intriguingly, Renaissance Technologies said goodbye to the biggest investment of all the hedgies tracked by Insider Monkey, valued at about $32.9 million in stock. Peter Rathjens, Bruce Clarke and John Campbell’s fund, Arrowstreet Capital, also sold off its stock, about $32.2 million worth. These transactions are interesting, as aggregate hedge fund interest dropped by 5 funds heading into Q3.

Let’s check out hedge fund activity in other stocks – not necessarily in the same industry as CenturyLink, Inc. (NYSE:CTL) but similarly valued. These stocks are Godaddy Inc (NYSE:GDDY), MarketAxess Holdings Inc. (NASDAQ:MKTX), Atmos Energy Corporation (NYSE:ATO), and Kansas City Southern (NYSE:KSU). All of these stocks’ market caps are closest to CTL’s market cap.

As you can see these stocks had an average of 25.5 hedge funds with bullish positions and the average amount invested in these stocks was $922 million. That figure was $1041 million in CTL’s case. Godaddy Inc (NYSE:GDDY) is the most popular stock in this table. On the other hand Atmos Energy Corporation (NYSE:ATO) is the least popular one with only 14 bullish hedge fund positions. CenturyLink, Inc. (NYSE:CTL) is not the most popular stock in this group but hedge fund interest is still above average. Our calculations showed that top 20 most popular stocks among hedge funds returned 24.4% in 2019 through September 30th and outperformed the S&P 500 ETF (SPY) by 4 percentage points. Hedge funds were also right about betting on CTL as the stock returned 8.5% during the third quarter and outperformed the market. Hedge funds were rewarded for their relative bullishness.