Before we spend countless hours researching a company, we’d like to analyze what insiders, hedge funds and billionaire investors think of the stock first. We would like to do so because our research has shown that the elite investors’ consensus returns have been exceptional. In the following paragraphs, we find out what the billionaire investors and hedge funds think of Capitol Investment Corp. IV (NYSE:CIC).

Capitol Investment Corp. IV (NYSE:CIC) investors should be aware of a decrease in enthusiasm from smart money of late. Our calculations also showed that cic isn’t among the 30 most popular stocks among hedge funds.

At Q4’s end, a total of 14 of the hedge funds tracked by Insider Monkey were bullish on this stock, a change of -7% from one quarter earlier. By comparison, 14 hedge funds held shares or bullish call options in CIC a year ago. With the smart money’s sentiment swirling, there exists a few notable hedge fund managers who were adding to their holdings substantially (or already accumulated large positions). 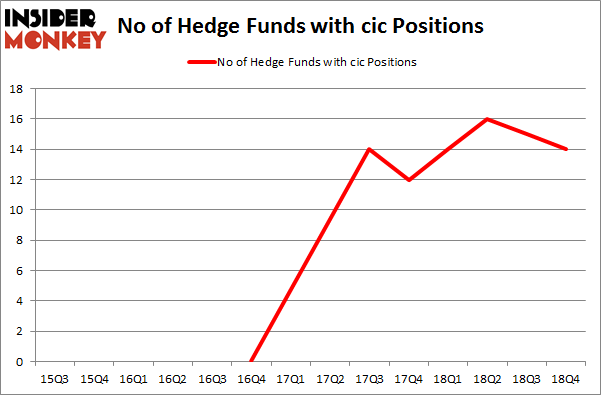 More specifically, Alyeska Investment Group was the largest shareholder of Capitol Investment Corp. IV (NYSE:CIC), with a stake worth $18 million reported as of the end of December. Trailing Alyeska Investment Group was Arrowgrass Capital Partners, which amassed a stake valued at $18 million. Fir Tree, Angelo Gordon & Co, and Highbridge Capital Management were also very fond of the stock, giving the stock large weights in their portfolios.

Seeing as Capitol Investment Corp. IV (NYSE:CIC) has experienced declining sentiment from the aggregate hedge fund industry, logic holds that there was a specific group of fund managers who were dropping their entire stakes last quarter. Interestingly, John M. Angelo and Michael L. Gordon’s Angelo Gordon & Co sold off the biggest investment of the “upper crust” of funds tracked by Insider Monkey, valued at about $17 million in stock, and Andrew Weiss’s Weiss Asset Management was right behind this move, as the fund cut about $6.6 million worth. These transactions are intriguing to say the least, as aggregate hedge fund interest was cut by 1 funds last quarter.

As you can see these stocks had an average of 10.25 hedge funds with bullish positions and the average amount invested in these stocks was $45 million. That figure was $162 million in CIC’s case. MarineMax, Inc. (NYSE:HZO) is the most popular stock in this table. On the other hand Gilat Satellite Networks Ltd. (NASDAQ:GILT) is the least popular one with only 2 bullish hedge fund positions. Capitol Investment Corp. IV (NYSE:CIC) is not the most popular stock in this group but hedge fund interest is still above average. This is a slightly positive signal but we’d rather spend our time researching stocks that hedge funds are piling on. Our calculations showed that top 15 most popular stocks) among hedge funds returned 24.2% through April 22nd and outperformed the S&P 500 ETF (SPY) by more than 7 percentage points. Unfortunately CIC wasn’t nearly as popular as these 15 stock and hedge funds that were betting on CIC were disappointed as the stock returned 3.8% and underperformed the market. If you are interested in investing in large cap stocks with huge upside potential, you should check out the top 15 most popular stocks) among hedge funds as 13 of these stocks already outperformed the market this year.