Our extensive research has shown that imitating the smart money can generate significant returns for retail investors, which is why we track nearly 750 active prominent money managers and analyze their quarterly 13F filings. The stocks that are heavily bought by hedge funds historically outperformed the market, though there is no shortage of high profile failures like hedge funds’ 2018 losses in Facebook and Apple. Let’s take a closer look at what the funds we track think about Canadian National Railway Company (NYSE:CNI) in this article.

Is Canadian National Railway Company (NYSE:CNI) a buy, sell, or hold? Prominent investors are in a pessimistic mood. The number of bullish hedge fund bets decreased by 7 lately. Our calculations also showed that cni isn’t among the 30 most popular stocks among hedge funds. 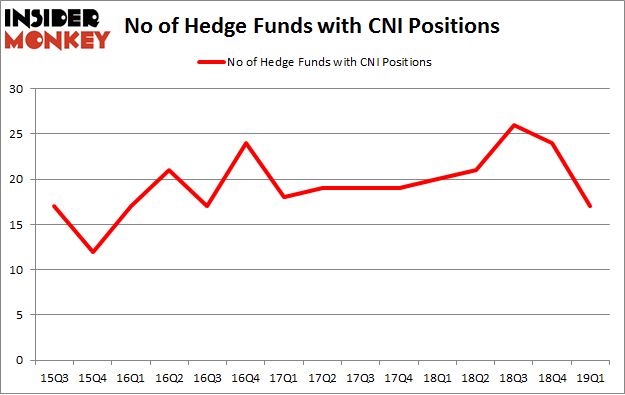 Among these funds, Bill & Melinda Gates Foundation Trust held the most valuable stake in Canadian National Railway Company (NYSE:CNI), which was worth $1532.5 million at the end of the first quarter. On the second spot was Arrowstreet Capital which amassed $327.2 million worth of shares. Moreover, AQR Capital Management, Renaissance Technologies, and Citadel Investment Group were also bullish on Canadian National Railway Company (NYSE:CNI), allocating a large percentage of their portfolios to this stock.

Seeing as Canadian National Railway Company (NYSE:CNI) has witnessed falling interest from hedge fund managers, it’s easy to see that there were a few hedge funds that elected to cut their positions entirely last quarter. Intriguingly, Nick Niell’s Arrowgrass Capital Partners sold off the largest position of all the hedgies tracked by Insider Monkey, worth close to $8.1 million in stock, and Sara Nainzadeh’s Centenus Global Management was right behind this move, as the fund sold off about $5.9 million worth. These moves are important to note, as aggregate hedge fund interest fell by 7 funds last quarter.

As you can see these stocks had an average of 16.5 hedge funds with bullish positions and the average amount invested in these stocks was $241 million. That figure was $2175 million in CNI’s case. Chubb Limited (NYSE:CB) is the most popular stock in this table. On the other hand Eni SpA (NYSE:E) is the least popular one with only 9 bullish hedge fund positions. Canadian National Railway Company (NYSE:CNI) is not the most popular stock in this group but hedge fund interest is still above average. This is a slightly positive signal but we’d rather spend our time researching stocks that hedge funds are piling on. Our calculations showed that top 20 most popular stocks among hedge funds returned 6.2% in Q2 through June 19th and outperformed the S&P 500 ETF (SPY) by nearly 3 percentage points. Unfortunately CNI wasn’t nearly as popular as these 20 stocks and hedge funds that were betting on CNI were disappointed as the stock returned 3.5% during the same period and underperformed the market. If you are interested in investing in large cap stocks with huge upside potential, you should check out the top 20 most popular stocks among hedge funds as 13 of these stocks already outperformed the market so far in Q2.