Is Callaway Golf Company (NYSE:ELY) a good equity to bet on right now? We like to check what the smart money thinks first before doing extensive research. Although there have been several high profile failed hedge fund picks, the consensus picks among hedge fund investors have historically outperformed the market after adjusting for known risk attributes. It’s not surprising given that hedge funds have access to better information and more resources to find the winners in the stock market.

Callaway Golf Company (NYSE:ELY) investors should pay attention to a decrease in enthusiasm from smart money lately. ELY was in 23 hedge funds’ portfolios at the end of the fourth quarter of 2018. There were 27 hedge funds in our database with ELY positions at the end of the previous quarter. Our calculations also showed that ELY isn’t among the 30 most popular stocks among hedge funds.

How have hedgies been trading Callaway Golf Company (NYSE:ELY)?

Heading into the first quarter of 2019, a total of 23 of the hedge funds tracked by Insider Monkey were bullish on this stock, a change of -15% from one quarter earlier. On the other hand, there were a total of 17 hedge funds with a bullish position in ELY a year ago. With hedge funds’ positions undergoing their usual ebb and flow, there exists a few key hedge fund managers who were adding to their stakes significantly (or already accumulated large positions). 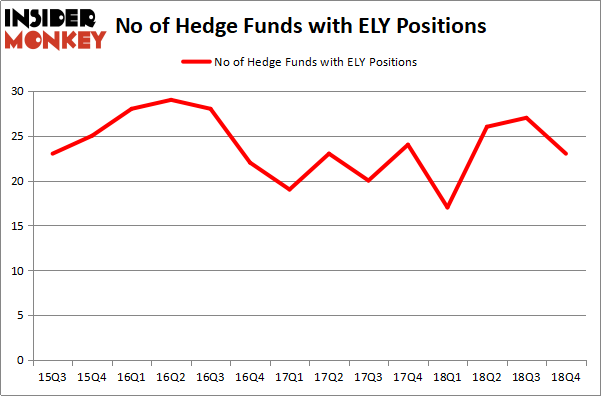 Seeing as Callaway Golf Company (NYSE:ELY) has experienced a decline in interest from hedge fund managers, we can see that there was a specific group of fund managers who sold off their entire stakes in the third quarter. Intriguingly, Ken Griffin’s Citadel Investment Group dumped the largest investment of all the hedgies monitored by Insider Monkey, valued at close to $9.3 million in stock, and David Harding’s Winton Capital Management was right behind this move, as the fund dropped about $6.7 million worth. These transactions are interesting, as aggregate hedge fund interest was cut by 4 funds in the third quarter.

As you can see these stocks had an average of 21.75 hedge funds with bullish positions and the average amount invested in these stocks was $115 million. That figure was $139 million in ELY’s case. World Fuel Services Corporation (NYSE:INT) is the most popular stock in this table. On the other hand WildHorse Resource Development Corporation (NYSE:WRD) is the least popular one with only 18 bullish hedge fund positions. Callaway Golf Company (NYSE:ELY) is not the most popular stock in this group but hedge fund interest is still above average. This is a slightly positive signal but we’d rather spend our time researching stocks that hedge funds are piling on. Our calculations showed that top 15 most popular stocks) among hedge funds returned 24.2% through April 22nd and outperformed the S&P 500 ETF (SPY) by more than 7 percentage points. Unfortunately ELY wasn’t nearly as popular as these 15 stock and hedge funds that were betting on ELY were disappointed as the stock returned 10.1% and underperformed the market. If you are interested in investing in large cap stocks with huge upside potential, you should check out the top 15 most popular stocks) among hedge funds as 13 of these stocks already outperformed the market this year.