BRP Inc. (NASDAQ:DOOO) was in 11 hedge funds’ portfolios at the end of December. DOOO has experienced a decrease in hedge fund sentiment lately. There were 16 hedge funds in our database with DOOO holdings at the end of the previous quarter. Our calculations also showed that dooo isn’t among the 30 most popular stocks among hedge funds. 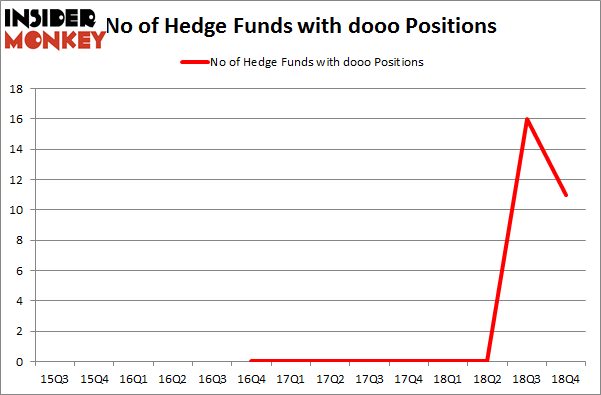 Among these funds, AQR Capital Management held the most valuable stake in BRP Inc. (NASDAQ:DOOO), which was worth $36.4 million at the end of the third quarter. On the second spot was Marshall Wace LLP which amassed $23.1 million worth of shares. Moreover, GLG Partners, Arrowstreet Capital, and Islet Management were also bullish on BRP Inc. (NASDAQ:DOOO), allocating a large percentage of their portfolios to this stock.

Since BRP Inc. (NASDAQ:DOOO) has faced declining sentiment from the entirety of the hedge funds we track, logic holds that there lies a certain “tier” of hedgies who were dropping their full holdings by the end of the third quarter. Intriguingly, Clint Carlson’s Carlson Capital sold off the biggest stake of all the hedgies followed by Insider Monkey, valued at an estimated $6.6 million in stock, and David Costen Haley’s HBK Investments was right behind this move, as the fund dumped about $4.7 million worth. These moves are intriguing to say the least, as total hedge fund interest fell by 5 funds by the end of the third quarter.

As you can see these stocks had an average of 19.75 hedge funds with bullish positions and the average amount invested in these stocks was $356 million. That figure was $122 million in DOOO’s case. Hilton Grand Vacations Inc. (NYSE:HGV) is the most popular stock in this table. On the other hand FTI Consulting, Inc. (NYSE:FCN) is the least popular one with only 16 bullish hedge fund positions. Compared to these stocks BRP Inc. (NASDAQ:DOOO) is even less popular than FCN. Our calculations showed that top 15 most popular stocks) among hedge funds returned 24.2% through April 22nd and outperformed the S&P 500 ETF (SPY) by more than 7 percentage points. A small number of hedge funds were also right about betting on DOOO, though not to the same extent, as the stock returned 20.4% and outperformed the market as well.