Hedge funds are not perfect. They have their bad picks just like everyone else. Facebook, a stock hedge funds have loved, lost nearly 40% of its value at one point in 2018. Although hedge funds are not perfect, their consensus picks do deliver solid returns, however. Our data show the top 15 S&P 500 stocks among hedge funds at the end of December 2018 yielded an average return of 19.7% year-to-date, vs. a gain of 13.1% for the S&P 500 Index. Because hedge funds have a lot of resources and their consensus picks do well, we pay attention to what they think. In this article, we analyze what the elite funds think of Brinker International, Inc. (NYSE:EAT).

Brinker International, Inc. (NYSE:EAT) shares haven’t seen a lot of action during the third quarter. Overall, hedge fund sentiment was unchanged. The stock was in 26 hedge funds’ portfolios at the end of December. The level and the change in hedge fund popularity aren’t the only variables you need to analyze to decipher hedge funds’ perspectives. A stock may witness a boost in popularity but it may still be less popular than similarly priced stocks. That’s why at the end of this article we will examine companies such as Cloudera, Inc. (NYSE:CLDR), ServisFirst Bancshares, Inc. (NASDAQ:SFBS), and Dycom Industries, Inc. (NYSE:DY) to gather more data points.

What does the smart money think about Brinker International, Inc. (NYSE:EAT)?

At Q4’s end, a total of 26 of the hedge funds tracked by Insider Monkey were long this stock, a change of 0% from one quarter earlier. The graph below displays the number of hedge funds with bullish position in EAT over the last 14 quarters. With hedge funds’ capital changing hands, there exists an “upper tier” of noteworthy hedge fund managers who were increasing their stakes considerably (or already accumulated large positions). 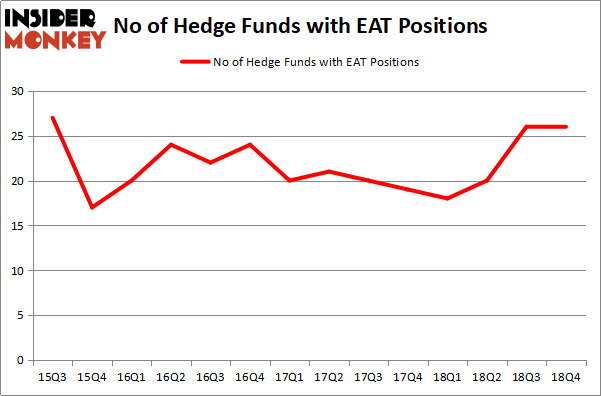 More specifically, AQR Capital Management was the largest shareholder of Brinker International, Inc. (NYSE:EAT), with a stake worth $34.3 million reported as of the end of December. Trailing AQR Capital Management was Point72 Asset Management, which amassed a stake valued at $18.7 million. Maverick Capital, Arrowstreet Capital, and Citadel Investment Group were also very fond of the stock, giving the stock large weights in their portfolios.

Judging by the fact that Brinker International, Inc. (NYSE:EAT) has experienced bearish sentiment from the smart money, logic holds that there was a specific group of hedgies who were dropping their entire stakes by the end of the third quarter. It’s worth mentioning that Gregg Moskowitz’s Interval Partners dumped the biggest position of all the hedgies monitored by Insider Monkey, totaling about $24.7 million in stock, and David Harding’s Winton Capital Management was right behind this move, as the fund said goodbye to about $12.9 million worth. These transactions are important to note, as total hedge fund interest stayed the same (this is a bearish signal in our experience).

As you can see these stocks had an average of 17.25 hedge funds with bullish positions and the average amount invested in these stocks was $136 million. That figure was $166 million in EAT’s case. Cloudera, Inc. (NYSE:CLDR) is the most popular stock in this table. On the other hand ServisFirst Bancshares, Inc. (NASDAQ:SFBS) is the least popular one with only 11 bullish hedge fund positions. Brinker International, Inc. (NYSE:EAT) is not the most popular stock in this group but hedge fund interest is still above average. This is a slightly positive signal but we’d rather spend our time researching stocks that hedge funds are piling on. Our calculations showed that top 15 most popular stocks) among hedge funds returned 24.2% through April 22nd and outperformed the S&P 500 ETF (SPY) by more than 7 percentage points. Unfortunately EAT wasn’t nearly as popular as these 15 stock and hedge funds that were betting on EAT were disappointed as the stock returned -2.4% and underperformed the market. If you are interested in investing in large cap stocks with huge upside potential, you should check out the top 15 most popular stocks) among hedge funds as 13 of these stocks already outperformed the market this year.