Hedge fund managers like David Einhorn, Bill Ackman, or Carl Icahn became billionaires through reaping large profits for their investors, which is why piggybacking their stock picks may provide us with significant returns as well. Many hedge funds, like Paul Singer’s Elliott Management, are pretty secretive, but we can still get some insights by analyzing their quarterly 13F filings. One of the most fertile grounds for large abnormal returns is hedge funds’ most popular small-cap picks, which are not so widely followed and often trade at a discount to their intrinsic value. In this article we will check out hedge fund activity in another small-cap stock: Braskem SA (NYSE:BAK).

Braskem SA (NYSE:BAK) was in 9 hedge funds’ portfolios at the end of the fourth quarter of 2018. BAK investors should be aware of a decrease in activity from the world’s largest hedge funds recently. There were 13 hedge funds in our database with BAK positions at the end of the previous quarter. Our calculations also showed that BAK isn’t among the 30 most popular stocks among hedge funds.

At the end of the fourth quarter, a total of 9 of the hedge funds tracked by Insider Monkey were bullish on this stock, a change of -31% from the second quarter of 2018. On the other hand, there were a total of 12 hedge funds with a bullish position in BAK a year ago. With the smart money’s sentiment swirling, there exists a select group of noteworthy hedge fund managers who were increasing their stakes considerably (or already accumulated large positions). 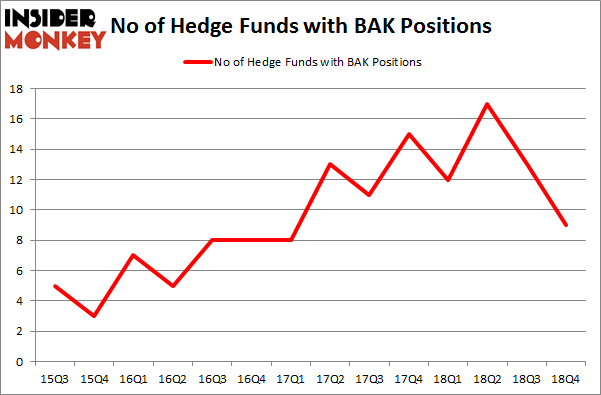 According to Insider Monkey’s hedge fund database, Jim Simons’s Renaissance Technologies has the most valuable position in Braskem SA (NYSE:BAK), worth close to $103.4 million, accounting for 0.1% of its total 13F portfolio. Coming in second is Adage Capital Management, managed by Phill Gross and Robert Atchinson, which holds a $84.9 million position; the fund has 0.2% of its 13F portfolio invested in the stock. Other peers that hold long positions include Jon Bauer’s Contrarian Capital, Clint Carlson’s Carlson Capital and Israel Englander’s Millennium Management.

Because Braskem SA (NYSE:BAK) has experienced a decline in interest from the entirety of the hedge funds we track, it’s easy to see that there were a few money managers that slashed their positions entirely in the third quarter. At the top of the heap, Peter Rathjens, Bruce Clarke and John Campbell’s Arrowstreet Capital cut the biggest investment of the 700 funds monitored by Insider Monkey, valued at an estimated $10.7 million in stock, and Alexander Mitchell’s Scopus Asset Management was right behind this move, as the fund dropped about $4.3 million worth. These bearish behaviors are interesting, as total hedge fund interest dropped by 4 funds in the third quarter.

As you can see these stocks had an average of 25.25 hedge funds with bullish positions and the average amount invested in these stocks was $498 million. That figure was $312 million in BAK’s case. Cabot Oil & Gas Corporation (NYSE:COG) is the most popular stock in this table. On the other hand IDEX Corporation (NYSE:IEX) is the least popular one with only 19 bullish hedge fund positions. Compared to these stocks Braskem SA (NYSE:BAK) is even less popular than IEX. Considering that hedge funds aren’t fond of this stock in relation to other companies analyzed in this article, it may be a good idea to analyze it in detail and understand why the smart money isn’t behind this stock. This isn’t necessarily bad news. Although it is possible that hedge funds may think the stock is overpriced and view the stock as a short candidate, they may not be very familiar with the bullish thesis. Our calculations showed that top 15 most popular stocks among hedge funds returned 19.7% through March 15th and outperformed the S&P 500 ETF (SPY) by 6.6 percentage points. Hedge funds were also right about betting on BAK, though not to the same extent, as the stock returned 17.4% and outperformed the market as well.