Is BP plc (NYSE:BP) worth your attention right now? The best stock pickers are in a bearish mood. The number of long hedge fund positions decreased by 5 in recent months. Our calculations also showed that bp isn’t among the 30 most popular stocks among hedge funds.

According to most market participants, hedge funds are seen as worthless, old financial vehicles of yesteryear. While there are more than 8000 funds trading at the moment, Our experts choose to focus on the elite of this club, about 750 funds. These investment experts preside over most of all hedge funds’ total asset base, and by keeping track of their best picks, Insider Monkey has unsheathed a few investment strategies that have historically defeated the market. Insider Monkey’s flagship hedge fund strategy exceeded the S&P 500 index by around 5 percentage points per annum since its inception in May 2014 through the end of May. We were able to generate large returns even by identifying short candidates. Our portfolio of short stocks lost 30.9% since February 2017 (through May 30th) even though the market was up nearly 24% during the same period. We just shared a list of 5 short targets in our latest quarterly update and they are already down an average of 11.9% in less than a couple of weeks whereas our long picks outperformed the market by 2 percentage points in this volatile 2 week period.

What does the smart money think about BP plc (NYSE:BP)? 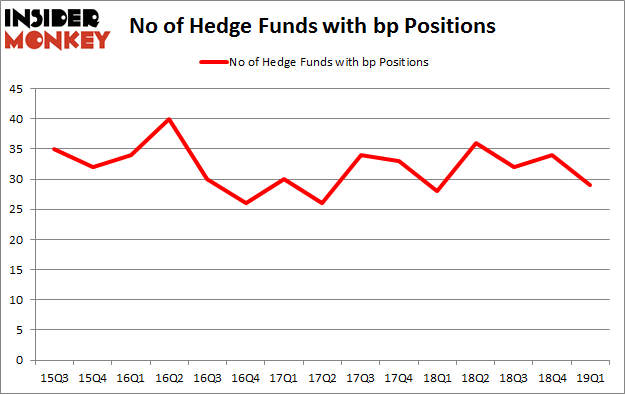 More specifically, Renaissance Technologies was the largest shareholder of BP plc (NYSE:BP), with a stake worth $531.9 million reported as of the end of March. Trailing Renaissance Technologies was Fisher Asset Management, which amassed a stake valued at $294.9 million. Orbis Investment Management, Alyeska Investment Group, and Arrowstreet Capital were also very fond of the stock, giving the stock large weights in their portfolios.

Seeing as BP plc (NYSE:BP) has faced falling interest from the smart money, it’s safe to say that there is a sect of fund managers who were dropping their positions entirely by the end of the third quarter. Intriguingly, Richard S. Pzena’s Pzena Investment Management dropped the largest position of the 700 funds monitored by Insider Monkey, comprising an estimated $132 million in stock, and Steve Cohen’s Point72 Asset Management was right behind this move, as the fund sold off about $59.9 million worth. These moves are intriguing to say the least, as total hedge fund interest was cut by 5 funds by the end of the third quarter.

As you can see these stocks had an average of 51 hedge funds with bullish positions and the average amount invested in these stocks was $3786 million. That figure was $1140 million in BP’s case. Citigroup Inc. (NYSE:C) is the most popular stock in this table. On the other hand TOTAL S.A. (NYSE:TOT) is the least popular one with only 13 bullish hedge fund positions. BP plc (NYSE:BP) is not the least popular stock in this group but hedge fund interest is still below average. This is a slightly negative signal and we’d rather spend our time researching stocks that hedge funds are piling on. Our calculations showed that top 20 most popular stocks among hedge funds returned 1.9% in Q2 through May 30th and outperformed the S&P 500 ETF (SPY) by more than 3 percentage points. Unfortunately BP wasn’t nearly as popular as these 20 stocks (hedge fund sentiment was quite bearish); BP investors were disappointed as the stock returned -4.8% during the same time period and underperformed the market. If you are interested in investing in large cap stocks with huge upside potential, you should check out the top 20 most popular stocks among hedge funds as 13 of these stocks already outperformed the market so far in Q2.

Here is What Hedge Funds Think About Becton, Dickinson and Company (BDX)
Monthly Newsletter Strategy
Download a free copy of our newsletter and see the details inside!
Hedge Fund Resource Center
Related News
Were Hedge Funds Right About Buying BP plc (BP)? Is It Time to Follow Hedge Funds Into BP p.l.c. (BP)? Billionaire Ken Fisher is Bullish About These Dividend Stocks Hedge Funds Like These European Companies; Should You? 16 Countries With The Biggest Oil Reserves In The World in 2017 10 Best Blue Chip Dividend Stocks in 2017 11 Best Oil Company Stocks To Buy Now 21 Best Tinder Bio Examples for Newly Single Moms 17 Best Excuses to Get Out of Work 25 Best Bumble Bios For Girls
Billionaire Hedge Funds