A market correction in the fourth quarter, spurred by a number of global macroeconomic concerns and rising interest rates ended up having a negative impact on the markets and many hedge funds as a result. The stocks of smaller companies were especially hard hit during this time as investors fled to investments seen as being safer. This is evident in the fact that the Russell 2000 ETF underperformed the S&P 500 ETF by 4 percentage points during the first half of the fourth quarter. We also received indications that hedge funds were trimming their positions amid the market volatility and uncertainty, and given their greater inclination towards smaller cap stocks than other investors, it follows that a stronger sell-off occurred in those stocks. Let’s study the hedge fund sentiment to see how those concerns affected their ownership of BP p.l.c. (NYSE:BP) during the quarter.

There was a decline in the number of hedge fund shareholders of BP p.l.c. (NYSE:BP) during Q3, with 32 holding shares of the stock at the end of the quarter, down from 36 in the middle of 2018. BP is one of 25 Dividend Stocks that Billionaire Ken Fisher is Bullish On, which has been the case dating back to at least 1999, so it says a lot that Fisher Investments became a lot more bullish on the stock during Q3, buying 6.53 million shares. BP raised its dividend (6.01% yield) for the first time in 4 years after its strong Q2 results, which included $2.8 billion in Underlying replacement cost profit, quadruple the amount from the second quarter of 2017.

According to most investors, hedge funds are seen as underperforming, outdated investment vehicles of years past. While there are more than 8,000 funds trading today, our experts choose to focus on the aristocrats of this club, approximately 700 funds. These investment experts have their hands on the majority of the hedge fund industry’s total capital, and by observing their finest picks, Insider Monkey has deciphered numerous investment strategies that have historically outpaced the S&P 500 index. Insider Monkey’s flagship hedge fund strategy beat the S&P 500 index by 6 percentage points per annum since its inception in May 2014 through early November 2018. We were able to generate large returns even by identifying short candidates. Our portfolio of short stocks lost 26.1% since February 2017 even though the market was up nearly 19% during the same period. We just shared a list of 11 short targets in our latest quarterly update.

How have hedgies been trading BP p.l.c. (NYSE:BP)? 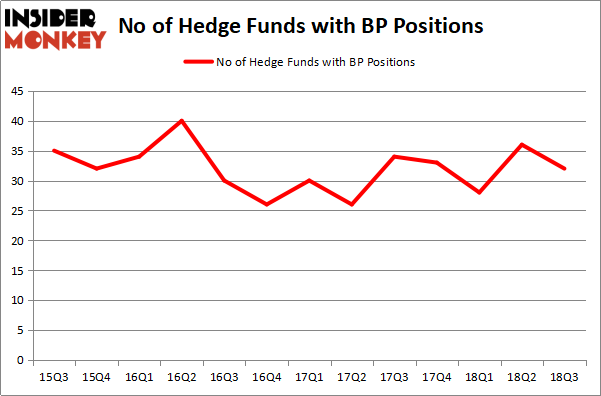 The largest stake in BP p.l.c. (NYSE:BP) was held by Arrowstreet Capital, which reported holding $726.3 million worth of stock at the end of September. It was followed by Renaissance Technologies with a $549.6 million position. Other investors bullish on the company included Fisher Asset Management, Pzena Investment Management, and Millennium Management.

Due to the fact that BP p.l.c. (NYSE:BP) has faced falling interest from the entirety of the hedge funds we track, it’s safe to say that there lies a certain “tier” of hedgies that elected to cut their entire stakes last quarter. Intriguingly, Andrew Feldstein and Stephen Siderow’s Blue Mountain Capital sold off the largest position of all the hedgies tracked by Insider Monkey, totaling about $64.2 million in call options. Till Bechtolsheimer’s fund, Arosa Capital Management, also said goodbye to its call options, about $45.7 million worth. These moves are important to note, as aggregate hedge fund interest dropped by 4 funds last quarter.

As you can see these stocks had an average of 14 hedge funds with bullish positions and the average amount invested in these stocks was $770 million. That figure was $2.44 billion in BP’s case. PetroChina Company Limited (NYSE:PTR) is the most popular stock in this table. On the other hand SAP SE (NYSE:SAP) is the least popular one with only 12 bullish hedge fund positions. Compared to these stocks BP p.l.c. (NYSE:BP) is more popular among hedge funds. Considering that hedge funds are fond of this stock in relation to its market cap peers, it may be a good idea to analyze it in detail and potentially include it in your portfolio.