Hedge fund interest in Bemis Company, Inc. (NYSE:BMS) shares was flat at the end of last quarter. This is usually a negative indicator. At the end of this article we will also compare BMS to other stocks including LogMeIn Inc (NASDAQ:LOGM), MAXIMUS, Inc. (NYSE:MMS), and AECOM (NYSE:ACM) to get a better sense of its popularity. 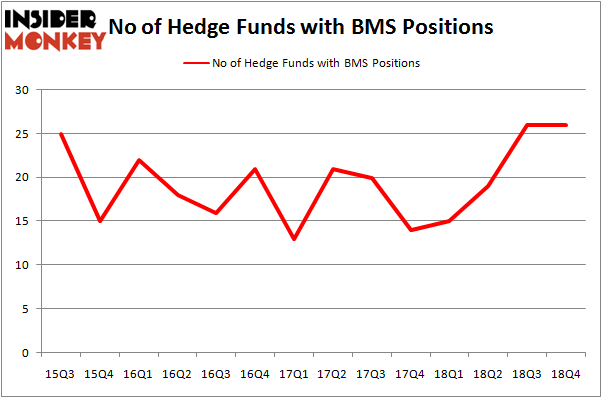 Of the funds tracked by Insider Monkey, Magnetar Capital, managed by Alec Litowitz and Ross Laser, holds the largest position in Bemis Company, Inc. (NYSE:BMS). Magnetar Capital has a $46.6 million position in the stock, comprising 1.1% of its 13F portfolio. The second most bullish fund manager is Starboard Value LP, led by Jeffrey Smith, holding a $25.9 million position; the fund has 0.8% of its 13F portfolio invested in the stock. Other professional money managers with similar optimism include Greg Poole’s Echo Street Capital Management, Carl Tiedemann and Michael Tiedemann’s TIG Advisors and Paul Marshall and Ian Wace’s Marshall Wace LLP.

Due to the fact that Bemis Company, Inc. (NYSE:BMS) has faced declining sentiment from hedge fund managers, logic holds that there exists a select few hedgies that decided to sell off their full holdings heading into Q3. Interestingly, James Dinan’s York Capital Management dropped the biggest position of all the hedgies watched by Insider Monkey, comprising an estimated $13.6 million in stock. John Orrico’s fund, Water Island Capital, also dropped its stock, about $12 million worth. These bearish behaviors are important to note, as aggregate hedge fund interest stayed the same (this is a bearish signal in our experience).

Let’s go over hedge fund activity in other stocks – not necessarily in the same industry as Bemis Company, Inc. (NYSE:BMS) but similarly valued. These stocks are LogMeIn Inc (NASDAQ:LOGM), MAXIMUS, Inc. (NYSE:MMS), AECOM (NYSE:ACM), and Seaboard Corporation (NYSE:SEB). All of these stocks’ market caps are similar to BMS’s market cap.

As you can see these stocks had an average of 19.5 hedge funds with bullish positions and the average amount invested in these stocks was $312 million. That figure was $305 million in BMS’s case. LogMeIn Inc (NASDAQ:LOGM) is the most popular stock in this table. On the other hand Seaboard Corporation (NYSE:SEB) is the least popular one with only 10 bullish hedge fund positions. Bemis Company, Inc. (NYSE:BMS) is not the most popular stock in this group but hedge fund interest is still above average. Our calculations showed that top 15 most popular stocks) among hedge funds returned 24.2% through April 22nd and outperformed the S&P 500 ETF (SPY) by more than 7 percentage points. Hedge funds were also right about betting on BMS, though not to the same extent, as the stock returned 20.8% and outperformed the market as well.