Does BCE Inc. (NYSE:BCE) represent a good buying opportunity at the moment? Let’s quickly check the hedge fund interest towards the company. Hedge fund firms constantly search out bright intellectuals and highly-experienced employees and throw away millions of dollars on satellite photos and other research activities, so it is no wonder why they tend to generate millions in profits each year. It is also true that some hedge fund players fail inconceivably on some occasions, but net net their stock picks have been generating superior risk-adjusted returns on average over the years.

BCE Inc. (NYSE:BCE) shares haven’t seen a lot of action during the first quarter. Overall, hedge fund sentiment was unchanged. The stock was in 16 hedge funds’ portfolios at the end of March. At the end of this article we will also compare BCE to other stocks including The Kraft Heinz Company (NASDAQ:KHC), Edwards Lifesciences Corporation (NYSE:EW), and Keurig Dr Pepper Inc. (NASDAQ:KDP) to get a better sense of its popularity.

Today there are a multitude of metrics stock market investors employ to assess stocks. Some of the most underrated metrics are hedge fund and insider trading activity. Our experts have shown that, historically, those who follow the top picks of the top money managers can outclass the S&P 500 by a significant margin (see the details here).

At the end of the first quarter, a total of 16 of the hedge funds tracked by Insider Monkey were bullish on this stock, a change of 0% from one quarter earlier. Below, you can check out the change in hedge fund sentiment towards BCE over the last 15 quarters. With hedge funds’ capital changing hands, there exists an “upper tier” of key hedge fund managers who were increasing their holdings substantially (or already accumulated large positions). 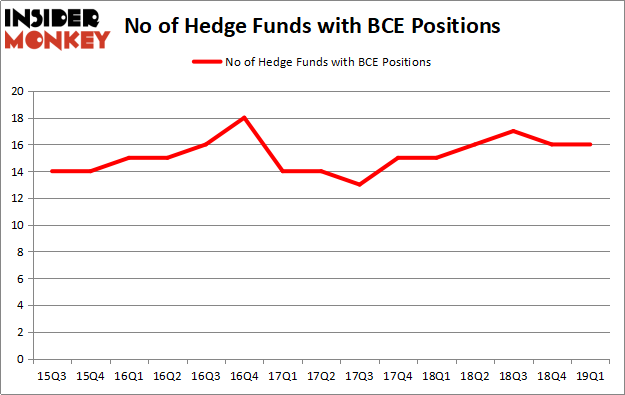 According to Insider Monkey’s hedge fund database, Jim Simons’s Renaissance Technologies has the number one position in BCE Inc. (NYSE:BCE), worth close to $130.6 million, corresponding to 0.1% of its total 13F portfolio. The second largest stake is held by Citadel Investment Group, managed by Ken Griffin, which holds a $101.1 million position; 0.1% of its 13F portfolio is allocated to the stock. Other peers that are bullish comprise Cliff Asness’s AQR Capital Management, Noam Gottesman’s GLG Partners and John Overdeck and David Siegel’s Two Sigma Advisors.

Seeing as BCE Inc. (NYSE:BCE) has witnessed a decline in interest from hedge fund managers, it’s safe to say that there lies a certain “tier” of money managers that elected to cut their full holdings heading into Q3. Intriguingly, Brad Dunkley and Blair Levinsky’s Waratah Capital Advisors dumped the biggest investment of the “upper crust” of funds monitored by Insider Monkey, comprising close to $1.3 million in stock, and Matthew Tewksbury’s Stevens Capital Management was right behind this move, as the fund cut about $0.9 million worth. These bearish behaviors are intriguing to say the least, as aggregate hedge fund interest stayed the same (this is a bearish signal in our experience).

As you can see these stocks had an average of 19.75 hedge funds with bullish positions and the average amount invested in these stocks was $3140 million. That figure was $423 million in BCE’s case. The Kraft Heinz Company (NASDAQ:KHC) is the most popular stock in this table. On the other hand Royal Bank of Scotland Group plc (NYSE:RBS) is the least popular one with only 3 bullish hedge fund positions. BCE Inc. (NYSE:BCE) is not the least popular stock in this group but hedge fund interest is still below average. Our calculations showed that top 20 most popular stocks among hedge funds returned 6.2% in Q2 through June 19th and outperformed the S&P 500 ETF (SPY) by nearly 3 percentage points. A small number of hedge funds were also right about betting on BCE, though not to the same extent, as the stock returned 3.8% during the same time frame and outperformed the market as well.