Hedge fund interest in BBX Capital Corporation (NYSE:BBX) shares was flat at the end of last quarter. This is usually a negative indicator. The level and the change in hedge fund popularity aren’t the only variables you need to analyze to decipher hedge funds’ perspectives. A stock may witness a boost in popularity but it may still be less popular than similarly priced stocks. That’s why at the end of this article we will examine companies such as SunCoke Energy, Inc (NYSE:SXC), Briggs & Stratton Corporation (NYSE:BGG), and Aptinyx Inc. (NASDAQ:APTX) to gather more data points.

In today’s marketplace there are numerous tools shareholders use to assess their holdings. Some of the less utilized tools are hedge fund and insider trading indicators. Our researchers have shown that, historically, those who follow the top picks of the top hedge fund managers can outperform the broader indices by a very impressive amount (see the details here).

How have hedgies been trading BBX Capital Corporation (NYSE:BBX)?

Heading into the first quarter of 2019, a total of 15 of the hedge funds tracked by Insider Monkey were bullish on this stock, a change of 0% from the previous quarter. On the other hand, there were a total of 16 hedge funds with a bullish position in BBX a year ago. With the smart money’s sentiment swirling, there exists an “upper tier” of key hedge fund managers who were adding to their holdings substantially (or already accumulated large positions). 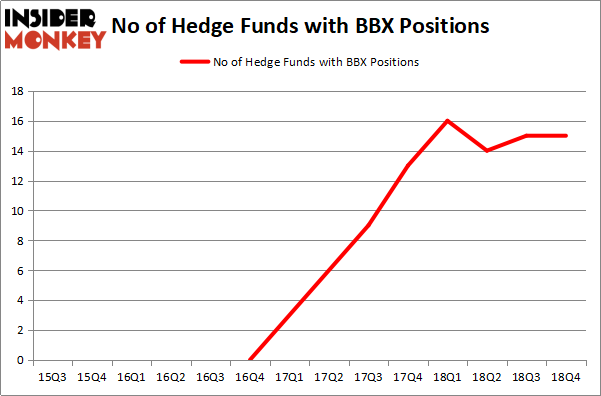 More specifically, Angelo Gordon & Co was the largest shareholder of BBX Capital Corporation (NYSE:BBX), with a stake worth $16.4 million reported as of the end of December. Trailing Angelo Gordon & Co was Renaissance Technologies, which amassed a stake valued at $6.2 million. Alta Fundamental Advisers, Fondren Management, and Scoggin were also very fond of the stock, giving the stock large weights in their portfolios.

Because BBX Capital Corporation (NYSE:BBX) has experienced bearish sentiment from hedge fund managers, we can see that there were a few fund managers that decided to sell off their entire stakes heading into Q3. It’s worth mentioning that Malcolm Fairbairn’s Ascend Capital sold off the biggest stake of the “upper crust” of funds followed by Insider Monkey, totaling an estimated $1 million in stock, and Roger Ibbotson’s Zebra Capital Management was right behind this move, as the fund cut about $0.1 million worth. These transactions are important to note, as total hedge fund interest stayed the same (this is a bearish signal in our experience).

As you can see these stocks had an average of 10 hedge funds with bullish positions and the average amount invested in these stocks was $55 million. That figure was $44 million in BBX’s case. SunCoke Energy, Inc (NYSE:SXC) is the most popular stock in this table. On the other hand Global Partners LP (NYSE:GLP) is the least popular one with only 4 bullish hedge fund positions. BBX Capital Corporation (NYSE:BBX) is not the most popular stock in this group but hedge fund interest is still above average. This is a slightly positive signal but we’d rather spend our time researching stocks that hedge funds are piling on. Our calculations showed that top 15 most popular stocks) among hedge funds returned 24.2% through April 22nd and outperformed the S&P 500 ETF (SPY) by more than 7 percentage points. Unfortunately BBX wasn’t nearly as popular as these 15 stock and hedge funds that were betting on BBX were disappointed as the stock returned 0.9% and underperformed the market. If you are interested in investing in large cap stocks with huge upside potential, you should check out the top 15 most popular stocks) among hedge funds as 13 of these stocks already outperformed the market this year.