Does Axcelis Technologies Inc (NASDAQ:ACLS) represent a good buying opportunity at the moment? Let’s briefly check the hedge fund interest towards the company. Hedge fund firms constantly search out bright intellectuals and highly-experienced employees and throw away millions of dollars on satellite photos and other research activities, so it is no wonder why they tend to generate millions in profits each year. It is also true that some hedge fund players fail inconceivably on some occasions, but net net their stock picks have been generating superior risk-adjusted returns on average over the years.

Axcelis Technologies Inc (NASDAQ:ACLS) was in 9 hedge funds’ portfolios at the end of December. ACLS investors should pay attention to a decrease in hedge fund sentiment of late. There were 13 hedge funds in our database with ACLS holdings at the end of the previous quarter. Our calculations also showed that ACLS isn’t among the 30 most popular stocks among hedge funds.

In the financial world there are dozens of methods stock traders can use to appraise publicly traded companies. Some of the most under-the-radar methods are hedge fund and insider trading moves. We have shown that, historically, those who follow the top picks of the best fund managers can trounce the market by a superb amount (see the details here).

At Q4’s end, a total of 9 of the hedge funds tracked by Insider Monkey were long this stock, a change of -31% from the second quarter of 2018. By comparison, 15 hedge funds held shares or bullish call options in ACLS a year ago. With the smart money’s sentiment swirling, there exists a select group of key hedge fund managers who were upping their stakes meaningfully (or already accumulated large positions). 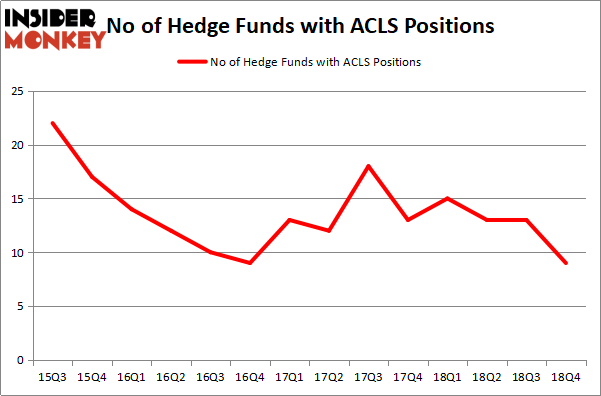 Among these funds, Rima Senvest Management held the most valuable stake in Axcelis Technologies Inc (NASDAQ:ACLS), which was worth $32.4 million at the end of the fourth quarter. On the second spot was Royce & Associates which amassed $15 million worth of shares. Moreover, Tenzing Global Investors, Balyasny Asset Management, and Renaissance Technologies were also bullish on Axcelis Technologies Inc (NASDAQ:ACLS), allocating a large percentage of their portfolios to this stock.

Because Axcelis Technologies Inc (NASDAQ:ACLS) has faced bearish sentiment from the smart money, it’s safe to say that there were a few money managers that elected to cut their entire stakes last quarter. At the top of the heap, Paul Marshall and Ian Wace’s Marshall Wace LLP said goodbye to the biggest investment of all the hedgies followed by Insider Monkey, worth an estimated $1.3 million in stock. Joel Greenblatt’s fund, Gotham Asset Management, also dumped its stock, about $0.9 million worth. These transactions are interesting, as aggregate hedge fund interest fell by 4 funds last quarter.

As you can see these stocks had an average of 11 hedge funds with bullish positions and the average amount invested in these stocks was $77 million. That figure was $67 million in ACLS’s case. Assembly Biosciences Inc (NASDAQ:ASMB) is the most popular stock in this table. On the other hand Preferred Apartment Communities Inc. (NYSEAMEX:APTS) is the least popular one with only 2 bullish hedge fund positions. Axcelis Technologies Inc (NASDAQ:ACLS) is not the least popular stock in this group but hedge fund interest is still below average. Our calculations showed that top 15 most popular stocks) among hedge funds returned 24.2% through April 22nd and outperformed the S&P 500 ETF (SPY) by more than 7 percentage points. A small number of hedge funds were also right about betting on ACLS, though not to the same extent, as the stock returned 20.3% and outperformed the market as well.