We at Insider Monkey have gone over 700 13F filings that hedge funds and prominent investors are required to file by the SEC The 13F filings show the funds’ and investors’ portfolio positions as of December 31st. In this article, we look at what those funds think of Ternium S.A. (NYSE:TX) based on that data.

Ternium S.A. (NYSE:TX) was in 12 hedge funds’ portfolios at the end of December. TX investors should pay attention to a decrease in activity from the world’s largest hedge funds of late. There were 14 hedge funds in our database with TX positions at the end of the previous quarter. Our calculations also showed that TX isn’t among the 30 most popular stocks among hedge funds.

What does the smart money think about Ternium S.A. (NYSE:TX)?

At Q4’s end, a total of 12 of the hedge funds tracked by Insider Monkey were bullish on this stock, a change of -14% from the second quarter of 2018. By comparison, 12 hedge funds held shares or bullish call options in TX a year ago. With the smart money’s sentiment swirling, there exists an “upper tier” of notable hedge fund managers who were increasing their stakes substantially (or already accumulated large positions). 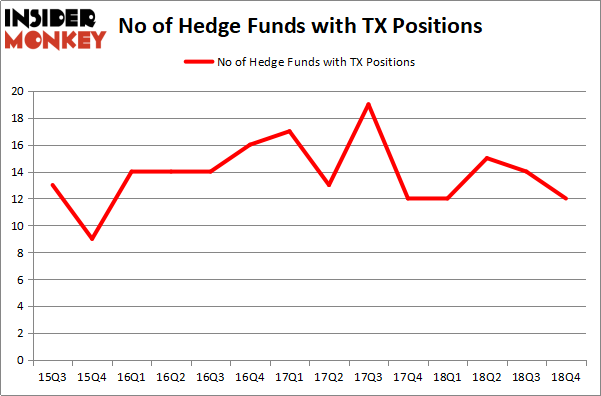 More specifically, Contrarian Capital was the largest shareholder of Ternium S.A. (NYSE:TX), with a stake worth $51.7 million reported as of the end of September. Trailing Contrarian Capital was Arrowstreet Capital, which amassed a stake valued at $11.2 million. Millennium Management, D E Shaw, and Renaissance Technologies were also very fond of the stock, giving the stock large weights in their portfolios.

Due to the fact that Ternium S.A. (NYSE:TX) has faced bearish sentiment from hedge fund managers, it’s easy to see that there was a specific group of fund managers who sold off their full holdings by the end of the third quarter. Interestingly, Paul Marshall and Ian Wace’s Marshall Wace LLP dropped the largest position of the 700 funds followed by Insider Monkey, comprising an estimated $5.8 million in stock. David Halpert’s fund, Prince Street Capital Management, also said goodbye to its stock, about $3.5 million worth. These bearish behaviors are interesting, as aggregate hedge fund interest was cut by 2 funds by the end of the third quarter.

As you can see these stocks had an average of 28.25 hedge funds with bullish positions and the average amount invested in these stocks was $594 million. That figure was $101 million in TX’s case. Arris International plc (NASDAQ:ARRS) is the most popular stock in this table. On the other hand Sonoco Products Company (NYSE:SON) is the least popular one with only 17 bullish hedge fund positions. Compared to these stocks Ternium S.A. (NYSE:TX) is even less popular than SON. Considering that hedge funds aren’t fond of this stock in relation to other companies analyzed in this article, it may be a good idea to analyze it in detail and understand why the smart money isn’t behind this stock. This isn’t necessarily bad news. Although it is possible that hedge funds may think the stock is overpriced and view the stock as a short candidate, they may not be very familiar with the bullish thesis. Our calculations showed that top 15 most popular stocks among hedge funds returned 21.3% through April 8th and outperformed the S&P 500 ETF (SPY) by more than 5 percentage points. Unfortunately TX wasn’t in this group. Hedge funds that bet on TX were disappointed as the stock returned 5.5% and underperformed the market. If you are interested in investing in large cap stocks, you should check out the top 15 hedge fund stocks as 12 of these outperformed the market.