Insider Monkey has processed numerous 13F filings of hedge funds and famous investors to create an extensive database of hedge fund holdings. The 13F filings show the hedge funds’ and investors’ positions as of the end of the fourth quarter. You can find write-ups about an individual hedge fund’s trades on numerous financial news websites. However, in this article we will take a look at their collective moves and analyze what the smart money thinks of Ashland Global Holdings Inc.. (NYSE:ASH) based on that data.

Ashland Global Holdings Inc.. (NYSE:ASH) investors should pay attention to an increase in enthusiasm from smart money recently. Our calculations also showed that ASH isn’t among the 30 most popular stocks among hedge funds.

What have hedge funds been doing with Ashland Global Holdings Inc.. (NYSE:ASH)? 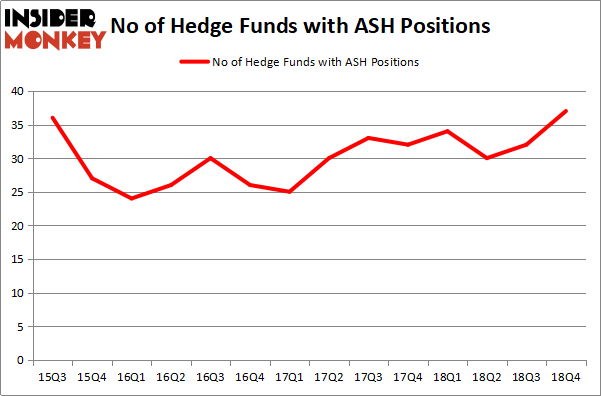 The largest stake in Ashland Global Holdings Inc.. (NYSE:ASH) was held by Luminus Management, which reported holding $218.8 million worth of stock at the end of September. It was followed by OZ Management with a $149 million position. Other investors bullish on the company included Cruiser Capital Advisors, Empyrean Capital Partners, and York Capital Management.