How do we determine whether Ascendis Pharma A/S (NASDAQ:ASND) makes for a good investment at the moment? We analyze the sentiment of a select group of the very best investors in the world, who spend immense amounts of time and resources studying companies. They may not always be right (no one is), but data shows that their consensus long positions have historically outperformed the market when we adjust for known risk factors.

Ascendis Pharma A/S (NASDAQ:ASND) shareholders have witnessed a decrease in hedge fund sentiment of late. ASND was in 33 hedge funds’ portfolios at the end of the second quarter of 2019. There were 35 hedge funds in our database with ASND holdings at the end of the previous quarter. Our calculations also showed that ASND isn’t among the 30 most popular stocks among hedge funds.

Unlike some fund managers who are betting on Dow reaching 40000 in a year, our long-short investment strategy doesn’t rely on bull markets to deliver double digit returns. We only rely on hedge fund buy/sell signals. Let’s analyze the fresh hedge fund action regarding Ascendis Pharma A/S (NASDAQ:ASND).

What have hedge funds been doing with Ascendis Pharma A/S (NASDAQ:ASND)?

At Q2’s end, a total of 33 of the hedge funds tracked by Insider Monkey held long positions in this stock, a change of -6% from the first quarter of 2019. Below, you can check out the change in hedge fund sentiment towards ASND over the last 16 quarters. With the smart money’s positions undergoing their usual ebb and flow, there exists a select group of key hedge fund managers who were increasing their stakes substantially (or already accumulated large positions). 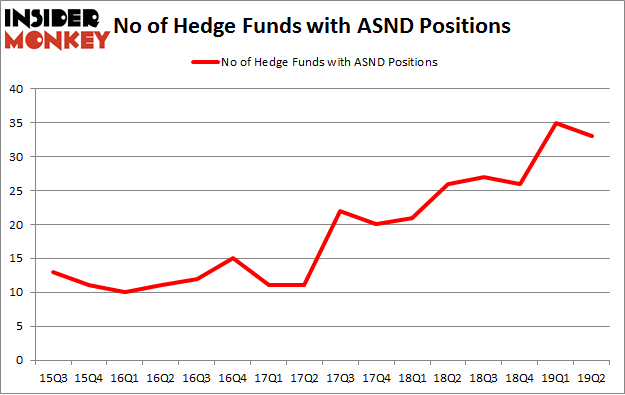 More specifically, RA Capital Management was the largest shareholder of Ascendis Pharma A/S (NASDAQ:ASND), with a stake worth $475.9 million reported as of the end of March. Trailing RA Capital Management was OrbiMed Advisors, which amassed a stake valued at $442.9 million. Baker Bros. Advisors, Vivo Capital, and venBio Select Advisor were also very fond of the stock, giving the stock large weights in their portfolios.

Due to the fact that Ascendis Pharma A/S (NASDAQ:ASND) has faced bearish sentiment from hedge fund managers, we can see that there lies a certain “tier” of fund managers who were dropping their positions entirely by the end of the second quarter. Intriguingly, Oleg Nodelman’s EcoR1 Capital said goodbye to the largest position of the 750 funds followed by Insider Monkey, totaling about $42.5 million in stock. James E. Flynn’s fund, Deerfield Management, also said goodbye to its stock, about $17 million worth. These moves are intriguing to say the least, as total hedge fund interest was cut by 2 funds by the end of the second quarter.

As you can see these stocks had an average of 25.75 hedge funds with bullish positions and the average amount invested in these stocks was $641 million. That figure was $2603 million in ASND’s case. Qurate Retail, Inc. (NASDAQ:QRTEA) is the most popular stock in this table. On the other hand Grupo Televisa SAB (NYSE:TV) is the least popular one with only 18 bullish hedge fund positions. Ascendis Pharma A/S (NASDAQ:ASND) is not the most popular stock in this group but hedge fund interest is still above average. This is a slightly positive signal but we’d rather spend our time researching stocks that hedge funds are piling on. Our calculations showed that top 20 most popular stocks among hedge funds returned 24.4% in 2019 through September 30th and outperformed the S&P 500 ETF (SPY) by 4 percentage points. Unfortunately ASND wasn’t nearly as popular as these 20 stocks and hedge funds that were betting on ASND were disappointed as the stock returned -16.4% during the third quarter and underperformed the market. If you are interested in investing in large cap stocks with huge upside potential, you should check out the top 20 most popular stocks (view the video below) among hedge funds as many of these stocks already outperformed the market so far this year.