We know that hedge funds generate strong, risk-adjusted returns over the long run, therefore imitating the picks that they are collectively bullish on can be a profitable strategy for retail investors. With billions of dollars in assets, smart money investors have to conduct complex analyses, spend many resources and use tools that are not always available for the general crowd. This doesn’t mean that they don’t have occasional colossal losses; they do (like Peltz’s recent General Electric losses). However, it is still a good idea to keep an eye on hedge fund activity. With this in mind, as the current round of 13F filings has just ended, let’s examine the smart money sentiment towards Arena Pharmaceuticals, Inc. (NASDAQ:ARNA).

Hedge fund interest in Arena Pharmaceuticals, Inc. (NASDAQ:ARNA) shares was flat at the end of last quarter. This is usually a negative indicator. At the end of this article we will also compare ARNA to other stocks including Cott Corporation (NYSE:COT), Quidel Corporation (NASDAQ:QDEL), and Chesapeake Energy Corporation (NYSE:CHK) to get a better sense of its popularity.

In the eyes of most market participants, hedge funds are assumed to be underperforming, old investment tools of years past. While there are over 8000 funds trading today, Our researchers hone in on the crème de la crème of this club, about 750 funds. These hedge fund managers preside over the lion’s share of the smart money’s total asset base, and by tailing their unrivaled equity investments, Insider Monkey has formulated many investment strategies that have historically outpaced the market. Insider Monkey’s flagship hedge fund strategy exceeded the S&P 500 index by nearly 5 percentage points per year since its inception in May 2014 through early November 2018. We were able to generate large returns even by identifying short candidates. Our portfolio of short stocks lost 27.5% since February 2017 (through March 12th) even though the market was up nearly 25% during the same period. We just shared a list of 6 short targets in our latest quarterly update and they are already down an average of 6% in less than a month.

Heading into the first quarter of 2019, a total of 25 of the hedge funds tracked by Insider Monkey were long this stock, a change of 0% from the second quarter of 2018. By comparison, 28 hedge funds held shares or bullish call options in ARNA a year ago. With hedgies’ sentiment swirling, there exists a select group of noteworthy hedge fund managers who were boosting their stakes substantially (or already accumulated large positions). 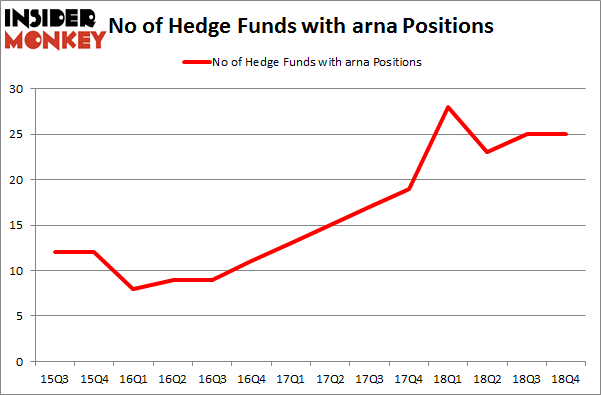 The largest stake in Arena Pharmaceuticals, Inc. (NASDAQ:ARNA) was held by Partner Fund Management, which reported holding $117.4 million worth of stock at the end of September. It was followed by Perceptive Advisors with a $55.6 million position. Other investors bullish on the company included Citadel Investment Group, Alyeska Investment Group, and Rubric Capital Management.

Judging by the fact that Arena Pharmaceuticals, Inc. (NASDAQ:ARNA) has faced a decline in interest from the entirety of the hedge funds we track, it’s easy to see that there is a sect of money managers that elected to cut their positions entirely last quarter. At the top of the heap, Kris Jenner, Gordon Bussard, Graham McPhail’s Rock Springs Capital Management dumped the largest investment of the 700 funds watched by Insider Monkey, totaling close to $17.3 million in call options. Brad Farber’s fund, Atika Capital, also said goodbye to its call options, about $1.2 million worth. These transactions are important to note, as aggregate hedge fund interest stayed the same (this is a bearish signal in our experience).

As you can see these stocks had an average of 21.75 hedge funds with bullish positions and the average amount invested in these stocks was $320 million. That figure was $354 million in ARNA’s case. Cott Corporation (NYSE:COT) is the most popular stock in this table. On the other hand Chesapeake Energy Corporation (NYSE:CHK) is the least popular one with only 15 bullish hedge fund positions. Arena Pharmaceuticals, Inc. (NASDAQ:ARNA) is not the most popular stock in this group but hedge fund interest is still above average. This is a slightly positive signal but we’d rather spend our time researching stocks that hedge funds are piling on. Our calculations showed that top 15 most popular stocks) among hedge funds returned 24.2% through April 22nd and outperformed the S&P 500 ETF (SPY) by more than 7 percentage points. Unfortunately ARNA wasn’t nearly as popular as these 15 stock and hedge funds that were betting on ARNA were disappointed as the stock returned 14.2% and underperformed the market. If you are interested in investing in large cap stocks with huge upside potential, you should check out the top 15 most popular stocks) among hedge funds as 13 of these stocks already outperformed the market this year.