Is AptarGroup, Inc. (NYSE:ATR) a buy right now? Money managers are in a bearish mood. The number of long hedge fund positions dropped by 2 lately. Our calculations also showed that ATR isn’t among the 30 most popular stocks among hedge funds. ATR was in 15 hedge funds’ portfolios at the end of the first quarter of 2019. There were 17 hedge funds in our database with ATR holdings at the end of the previous quarter.

In today’s marketplace there are many methods market participants use to appraise publicly traded companies. A duo of the less known methods are hedge fund and insider trading indicators. We have shown that, historically, those who follow the top picks of the top money managers can trounce the market by a healthy margin (see the details here).

What does smart money think about AptarGroup, Inc. (NYSE:ATR)? 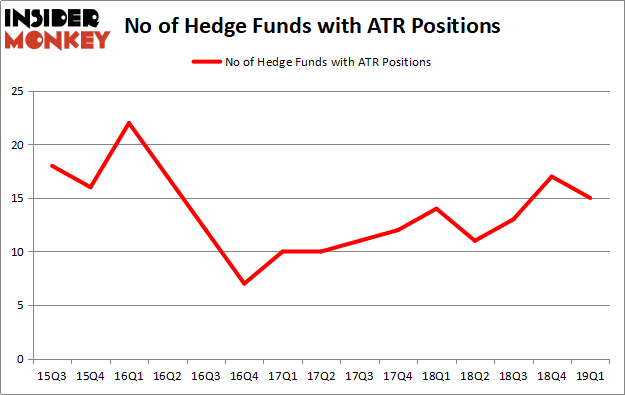 The largest stake in AptarGroup, Inc. (NYSE:ATR) was held by Millennium Management, which reported holding $27.5 million worth of stock at the end of March. It was followed by Royce & Associates with a $21.4 million position. Other investors bullish on the company included Renaissance Technologies, GLG Partners, and Marshall Wace LLP.

Since AptarGroup, Inc. (NYSE:ATR) has experienced declining sentiment from the aggregate hedge fund industry, logic holds that there is a sect of fund managers that decided to sell off their positions entirely heading into Q3. It’s worth mentioning that Peter Rathjens, Bruce Clarke and John Campbell’s Arrowstreet Capital sold off the biggest stake of the “upper crust” of funds monitored by Insider Monkey, valued at close to $0.7 million in stock, and Ray Dalio’s Bridgewater Associates was right behind this move, as the fund sold off about $0.6 million worth. These bearish behaviors are intriguing to say the least, as total hedge fund interest fell by 2 funds heading into Q3.

Let’s check out hedge fund activity in other stocks – not necessarily in the same industry as AptarGroup, Inc. (NYSE:ATR) but similarly valued. We will take a look at Amarin Corporation plc (NASDAQ:AMRN), Moderna, Inc. (NASDAQ:MRNA), Zayo Group Holdings Inc (NYSE:ZAYO), and Genpact Limited (NYSE:G). This group of stocks’ market values are similar to ATR’s market value.

As you can see these stocks had an average of 32.75 hedge funds with bullish positions and the average amount invested in these stocks was $1184 million. That figure was $81 million in ATR’s case. Zayo Group Holdings Inc (NYSE:ZAYO) is the most popular stock in this table. On the other hand Moderna, Inc. (NASDAQ:MRNA) is the least popular one with only 15 bullish hedge fund positions. Compared to these stocks AptarGroup, Inc. (NYSE:ATR) is even less popular than MRNA. Hedge funds clearly dropped the ball on ATR as the stock delivered strong returns, though hedge funds’ consensus picks still generated respectable returns. Our calculations showed that top 20 most popular stocks among hedge funds returned 6.2% in Q2 through June 19th and outperformed the S&P 500 ETF (SPY) by nearly 3 percentage points. A small number of hedge funds were also right about betting on ATR as the stock returned 12.6% during the same period and outperformed the market by an even larger margin.