Although the masses and most of the financial media blame hedge funds for their exorbitant fee structure and disappointing performance, these investors have proved to have great stock picking abilities over the years (that’s why their assets under management continue to swell). We believe hedge fund sentiment should serve as a crucial tool of an individual investor’s stock selection process, as it may offer great insights of how the brightest minds of the finance industry feel about specific stocks. After all, these people have access to smartest analysts and expensive data/information sources that individual investors can’t match. So should one consider investing in AMN Healthcare Services Inc (NYSE:AMN)? The smart money sentiment can provide an answer to this question.

AMN Healthcare Services Inc (NYSE:AMN) shares haven’t seen a lot of action during the third quarter. Overall, hedge fund sentiment was unchanged. The stock was in 15 hedge funds’ portfolios at the end of December. The level and the change in hedge fund popularity aren’t the only variables you need to analyze to decipher hedge funds’ perspectives. A stock may witness a boost in popularity but it may still be less popular than similarly priced stocks. That’s why at the end of this article we will examine companies such as Ormat Technologies, Inc. (NYSE:ORA), Guangshen Railway Co. Ltd (NYSE:GSH), and Steven Madden, Ltd. (NASDAQ:SHOO) to gather more data points.

In the eyes of most traders, hedge funds are assumed to be worthless, old financial tools of yesteryear. While there are more than 8000 funds in operation today, Our researchers hone in on the leaders of this club, about 750 funds. Most estimates calculate that this group of people handle the majority of the hedge fund industry’s total capital, and by paying attention to their first-class investments, Insider Monkey has spotted a number of investment strategies that have historically beaten the broader indices. Insider Monkey’s flagship hedge fund strategy beat the S&P 500 index by nearly 5 percentage points per annum since its inception in May 2014 through early November 2018. We were able to generate large returns even by identifying short candidates. Our portfolio of short stocks lost 27.5% since February 2017 (through March 12th) even though the market was up nearly 25% during the same period. We just shared a list of 6 short targets in our latest quarterly update and they are already down an average of 6% in less than a month.

What does the smart money think about AMN Healthcare Services Inc (NYSE:AMN)? 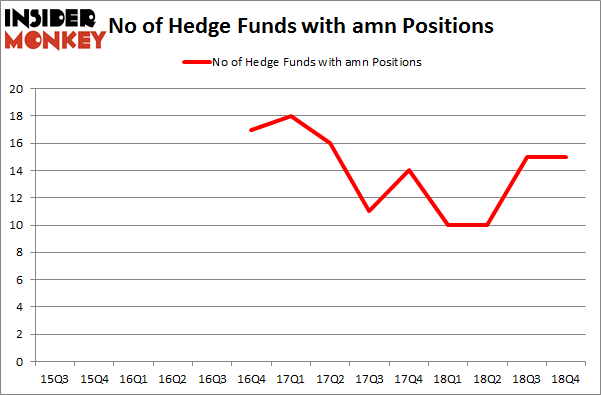 Seeing as AMN Healthcare Services Inc (NYSE:AMN) has experienced falling interest from the entirety of the hedge funds we track, logic holds that there is a sect of fund managers that slashed their entire stakes heading into Q3. Intriguingly, Martin Whitman’s Third Avenue Management said goodbye to the biggest investment of the 700 funds followed by Insider Monkey, valued at an estimated $3.1 million in stock. Mike Vranos’s fund, Ellington, also cut its stock, about $0.8 million worth. These moves are intriguing to say the least, as total hedge fund interest stayed the same (this is a bearish signal in our experience).

As you can see these stocks had an average of 11 hedge funds with bullish positions and the average amount invested in these stocks was $122 million. That figure was $49 million in AMN’s case. Cyberark Software Ltd (NASDAQ:CYBR) is the most popular stock in this table. On the other hand Guangshen Railway Co. Ltd (NYSE:GSH) is the least popular one with only 1 bullish hedge fund positions. AMN Healthcare Services Inc (NYSE:AMN) is not the most popular stock in this group but hedge fund interest is still above average. This is a slightly positive signal but we’d rather spend our time researching stocks that hedge funds are piling on. Our calculations showed that top 15 most popular stocks) among hedge funds returned 24.2% through April 22nd and outperformed the S&P 500 ETF (SPY) by more than 7 percentage points. Unfortunately AMN wasn’t nearly as popular as these 15 stock and hedge funds that were betting on AMN were disappointed as the stock returned -15.7% and underperformed the market. If you are interested in investing in large cap stocks with huge upside potential, you should check out the top 15 most popular stocks) among hedge funds as 13 of these stocks already outperformed the market this year.